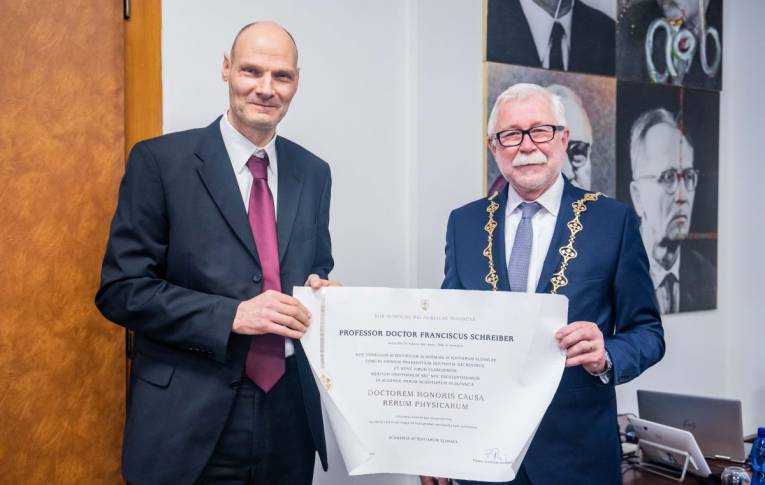 The Slovak Academy of Sciences awarded the scientific title Doctor of Science honoris causa (Dr. Sc. h. c.) to the German scientist, physicist Prof. Dr.  Frank Schreiber from the Fakultät für Physik, Universität Tübingen in the Federal Republic of Germany. The Scientific Council of Slovak Academy of Sciences gave him the title mainly for close cooperation with the Institute of Physics SAS and for his merits in supporting science and the development of experimental physics. The ceremony was held on Wednesday, October 12, 2022, on the SAS premises, where Frank Schreiber received his title from the hands of the President of the Academy, Prof. Pavol Šajgalik.

After the introductory words of welcome from the President of the SAS, Dr. Rer. Nat. Peter Šiffalovič, DrSc., from the Institute of Physics SAS, delivered a laudatio. Its full wording is published in the attachment.

"It is an honour to award you this title on behalf of the SAS, which is a reflection of your scientific work," said Prof. Pavol Šajgalík. Prof.  Frank Schreiber responded to the awarding of the title with Slovak words of thank you. "It is an honour and satisfaction for my work in Slovakia. I am very happy," emphasized the German physicist in his acceptance speech.

Prof. Dr. Frank Schreiber is an extraordinary personality in science in the field of physics and physical chemistry of molecular and biological substances. He achieved significant achievements in the research of charge-initiated interactions, phase behaviour and dynamics of biomacromolecules, the study of the formation of self-organized monolayers on flat surfaces and nanoparticles, as well as the research of hybrid organic-inorganic nanostructures and multicomponent organic semiconductors.

So far, he has published more than 330 scientific papers (WoS), including six papers in Nature group journals, one paper in Science and dozens of papers in other high-impact journals.

Since his doctoral days, he has received several awards for the results of his scientific work. The research activity of Prof. F. Schreiber is closely related to the use of diagnostic methods based on the scattering of X-ray (rtg) radiation from synchrotrons and neutron scattering. He is a successful applicant for machine time on synchrotron rings and neutron reactors, which is allocated by a panel based on the scientific quality of the proposed experiment.

Cooperation between the Institute of Physics SAS and Prof.  F. Schreiber started a few years ago, when he first visited the Institute during an international conference. The Department of Multilayers and Nanostructures (OMN) of the FÚ SAV also uses the scattering of synchrotron radiation in the x-ray region in its research. During the visit of Prof.  F. Schreiber, the OMN has already published several interesting results from the research of inorganic nanostructures and the monitoring of processes on the nanoscale in real time using the methods of small- and large-angle scattering of synchrotron x-ray radiation. Prof. F. Schreiber was interested in these results and offered his expertise for cooperation in the field of development and application of synchrotron x-ray scattering methods for the study of organic and van der Waals hybrid nanostructures for organic (opto)electronics. These structures opened a new research topic at OMN FÚ SAV. The collaboration focused on the study of the growth of layers of small organic molecules (pentacene, diindoperylene, etc.) and the control of this growth using base layers (templates) made of two-dimensional materials (MoS2, graphene, etc.), which offers a unique possibility to control the orientation of molecular layers (standing versus lying) with a direct impact on electron transport and optical properties. Within the framework of the cooperation of OMN FÚ SAV with the group of Prof. Schreiber, a detailed analysis of growth processes in real time using the scattering of synchrotron x-ray radiation was developed, concerning original methodologies and, based on this, joint proposals for experiments on synchrotron rings had been submitted. A total of 12 joint proposals for experiments were submitted between 2017 and 2020 and were successful in strong competition. Such high success in obtaining machine time at synchrotrons was achieved only thanks to cooperation with Prof.  F. Schreiber, which was also crucial for the preparation of these experiments in the OMN laboratories.

In addition to the scientific contribution, the cooperation with Prof.  F. Schreiber was also aimed at improving the quality of scientific education. Several doctoral students of the FÚ SAV were actively involved in the already mentioned synchrotron experiments with the group of Prof.F. Schreiber. In addition to the quality of their study results, the experience of such experiments at top international facilities contributed significantly to their personal growth.

The cooperation of OMN FÚ SASV with the group of Prof. F. Schreiber has so far produced more than a dozen joint publications in renowned international journals.