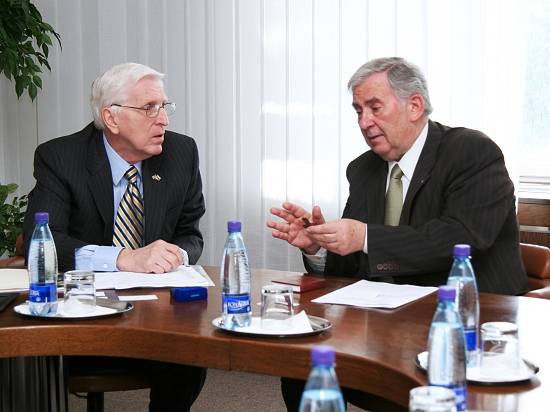 the United States of America in Slovakia visited the Slovak Academy of Sciences. He was accompanied by Edward Kemp, the Cultural Attaché of the US Embassy in Bratislava.

Vincent Obsitnik and Edward Kemp were welcomed by Prof. Štefan Luby, President of SAS, the SAS Vice-Presidents for Sections I – III, Fedor Gömöry, Ivan Zahradník and Kováč, Ľubomír Falťan, the SAS Scientific Secretary, Ján Barančík, the Head of SAS Department of International Cooperation and František Fundárek, Programme Officer of the SAS Department of International Cooperation responsible for the scientific cooperation with the USA.

At the beginning Prof. Luby informed the US Ambassador about the present scientific cooperation between SAS and the partner institutions in the United States. He picked up the cooperation with the National Science Foundation and he mentioned that currently almost 40 joint projects with participation of SAS institutes and their American partner institutions are running. In addition to this František Fundárek presented some details about the project cooperation with the USA according the particular SAS scientific sections and institutes. Ivan Zahradník, the SAS Vice-president for Section II stressed out the key role of the personal contacts in the process of suggesting and launching of new projects and he pointed out that international conferences are the primary sources of the establishing of new contacts.

Vincent Obsitnik presented the idea of informative workshop which could be held by end of June 2008, in order to present the results of the joint Slovak-American projects and develop new ideas as contingent basis for new projects. Prof. Luby accepted this idea and he suggested that the workshop could be held in the first decade of July 2008. About 10 Slovak project leaders representing similar project types or project clusters will inform the representatives of the US Embassy about the project results and bring new ideas which should be implemented in the future.

The representatives of SAS and the delegation of the US Embassy discussed the issues related to the funding of the research in Slovakia and the United States and the ways of the commercializing of the research results. There is a wide difference between the role of the patents in Slovakia and in the USA: in the United States the number of protected patents reflects the productivity of a company or a whole branch, but in contrast to this, due to high cost and administrative barriers the patent activity in Slovakia is quite law. The research institutes in Slovakia are looking for other ways to implement their research results in the praxis as patents. About 10 patents yearly are presented by the SAS institutes and 1 of them will be commercialized. Slovak researchers are also applying for patents through institutions in the United States, Japan, Germany, etc.