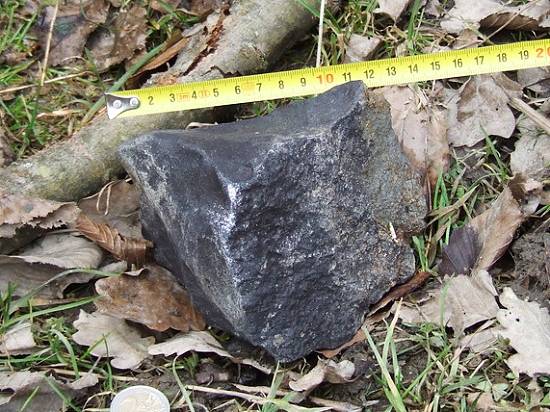 Meteorite "Kosice", the fall in Slovakia

22. 4. 2010 | 3451 visits
On February 28th at 22:24:46 UT a bright bolide enlightened the night sky over the Central Europe. Despite the late hour bunch of people were watching Olympics ice hockey finals on TV and eye witnessed astonishing celestial spectacle.

The glare of the bolide illuminated streets and interior of apartments, at some places in Eastern Slovakia cannon-like burst or series of low frequency blasts were heard. Due to the bad weather, cloudy skies and scatter showers the Central European Fireball Network (operated by dr. Pavel Spurny of the Czech Academy of Sciences) did not take direct optical records of the bolide and Slovak Video Network (operated by dr. Juraj Toth of Comenius University in Bratislava) did not operate that night so that at first moment it seemed that there are no scientific records of this event. Fortunately fast photoelectric sensors on 7 automated fireball stations in the Czech Republic (6) and Austria (1) detected the illumination of the sky caused by the bolide which enabled to determine exact time and duration of the bolide and estimate its brightness. The bolide reached the maximum brightness at least -18 magnitude in one huge flare. In the morning few photographers took a picture of a possible scatter dust trail. Later on several surveillance camera data were published showing the moment when the night became a day for a second but only two videos from Hungary (Orkeny village, Fazzi Daniella and Vass Gabor; Telki village, contact persons Szarneczky Krisztian, Kiss Laszlo) actually captured the fireball itself. Thanks to calibration of videos by several members of the Hungarian Astronomical Association (MCSE - www.mcse.hu) contributed (namely Igaz Antal) and trajectory analysis done by dr. Jiri Borovicka of the Czech Academy of Sciences gave the hope that significant number of meteorite fragments reached the surface. He also calculated the impact area near town Kosice in Eastern Slovakia. The expedition consisting of scientists and graduate students of the Astronomical Institute of the Slovak Academy of Sciences (under the leadership of Jan Svoren), Comenius University in Bratislava (under the leadership of Juraj Toth), Czech Academy of Sciences (under the leadership of Pavel Spurny) started to sweep meadows and forests at the calculated area. The first meteorite was discovered by Juraj Tóth on March 20th. Until the March 28th, 64 meteorite fragments were found. The heaviest fragment weights 2.19 kg, the smallest pieces were only about 0.5 gram. The total mass recovered is equal to 3.917kg. Preliminary analysis implies that the recovered meteorite is classified as an ordinary H5 chondrite (dr. J. Haloda, Czech GeologicalSurvey). The ongoing data analysis will reveal also other parameters of this bolide as the meteorite atmospheric velocity, pre-atmospheric mass and initial orbit in the Solar System. According to Slovak laws, meteorites belong to the state. Collecting meteorites is allowed only to state or academic institutions from Slovak Republic.