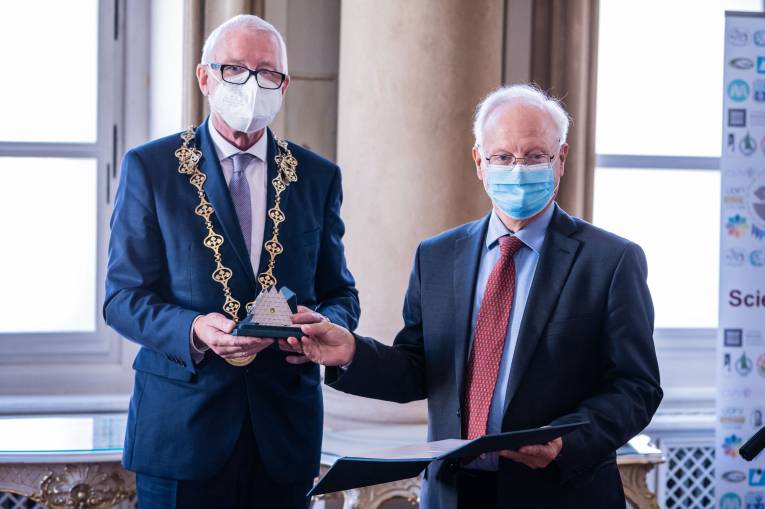 Today, the Slovak Academy of Sciences presented the International SAS Award for Social Sciences and Culture in the Hall of Mirrors of the Bratislava Primate's Palace. The award was accepted by Professor Antoine Marès, a prominent expert on the history of Central Europe. Under his leadership, he brings together a large group of French scientists who specialise in the knowledge of contemporary Central Europe - Groupement de recherches GDR - Connaissance de l´Europe médiane. In France, he is considered the most important scientific authority in the history of Czechoslovakia. He is currently Professor Emeritus at the Université Paris 1 Panthéon Sorbonne. His long-term cooperation with Slovak historians and social scientists forms a smaller but significant part of his scientific-research, scientific-organisational and pedagogical activities.

"Receiving your annual award is a huge and, at the same time, unexpected honour for me. I very much appreciate the award you have given me and consider it an award for French research on Central Europe. First of all, I dedicate it to all my Slovak friends, those who stimulated my thoughts on Slovakia, my colleagues from the university and the French National Centre for Scientific Research, who accompanied me for more than forty years,” said Professor Marès in his speech.

After studying history, Antoine Marès began to specialise in the history of Central and Eastern Europe and studied the Russian language at INALCO (Institut national des langues et civilisations orientales).

The Prague Spring and the occupation of Czechoslovakia by Warsaw Pact troops in 1968 (and the concurrence of a serious illness) contributed to the fact that he chose the problematique from the history of Czechoslovakia - the Czechoslovak Foreign Movement during the First World War. He researched this issue in 1975 during a study stay in the Prague archives and also travelled to Slovakia. He learned Czech and paid attention to Czech and Slovak historiography. Although from a long-term historical point of view, he mainly based his knowledge on the history of the Czech lands, he also paid attention to the history of Slovakia. His view was not distorted by the lens of Prague.

In his scientific work, Antoine Marès followed up on the findings of important French Slavists and Bohemians, directly on his predecessor at the head of the Centre for the History of Central Europe at the Sorbonne University in Paris, Professor Bernard Michel (1935 - 2013). After his retirement, Professor Marés led an informal French-Czech-Slovak commission of historians in the Czech Republic in cooperation with Professor Eduard Mauro, later with Professor Milena Lenderová, in Slovakia with Bohumila Ferenčuhová (HÚ SAV), an academic of the Learned Society of Slovakia.

As the director of CEFRES in Prague from 1998 to 2001, Antoine Marès significantly contributed to the development of social sciences in Slovakia and Slovak-French cultural relations. He also collaborated with Slovak historians at the first scientific conference dedicated to M. R. Štefánik in France in March 1999.

Professor Marès works as a foreign member of the editorial board of the Historical Magazine. He participates in the scientific education of doctoral students. He helps all Slovak doctoral students in the field of history who are sent on a study stay in Paris.