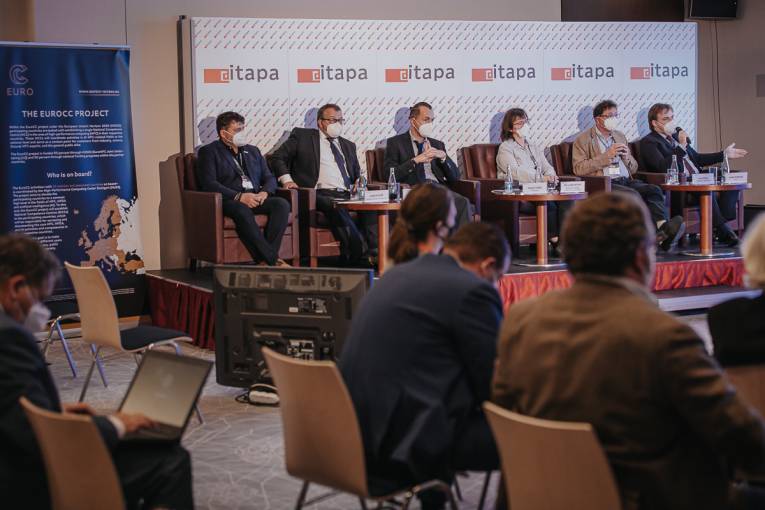 NCC Slovakia at the Itapa 2021 congress

On November 9th, 2021 the second day of the Itapa congress took place featuring several contributions focused on high-performance computing as an important tool for enabling innovations, ensuring the competitiveness of economies as well as for supporting security and scientific research.

The Slovak National Competence Centre for HPC in collaboration with the congress organizers invited Mr. Gustav Kalbe as one of the keynote speakers. As a representative of the EuroHPC JU, he covered this topic from the global and European point of view.

The following panel discussion, organized with the support of the NCC, highlighted the situation in HPC in Slovakia. Lukáš Demovič, who is the director of the Centre of Operations, Slovak Academy of Sciences – an institution operating the only publicly available HPC infrastructure – spoke about the current possibilities, ongoing projects and ambitious plans for significant expansion of computational capacities in Slovakia.

The importance of investments and support of this field was stressed also by other speakers. Prof. Ivan Štich, who is active within the TREX CoE, showed use cases of 2D materials modelling using the QMC method, which is, thanks to it’s robustness and scalability, especially suited for utilizing the coming exascale systems. Prof. Mária Bieliková from the Kempelen institute of intelligent technologies introduced a newly developed large neural language model for Slovak. She also mentioned the aspect of large energy consumption that comes with many AI applications and models together with the strategies scientists employ to mitigate this problem. Jozef Vivoda described models for numerical weather forecasting, employed and (co)developed at the Slovak hydrometeorological institute, their level of precision as well as computational demands. Robert Cisár from the Tachyum company and Luboš Kolář from HPE took part in the discussion as representatives from the private sector.

All speakers agreed on the necessity of investing into HPC technologies at the national level and the importance of supporting the whole ecosystem at the same time. The lack of concept on the state level and the lengthy and disproportionately complicated process of public procurement were identified as main problems when planning and purchasing new supercomputers. The National competence centre is focusing it’s efforts primarily on building the supporting ecosystem and raising the adoption of HPC tools and connected technologies across all sectors. Without an available HPC infrastructure, however, this task remains a challenge.