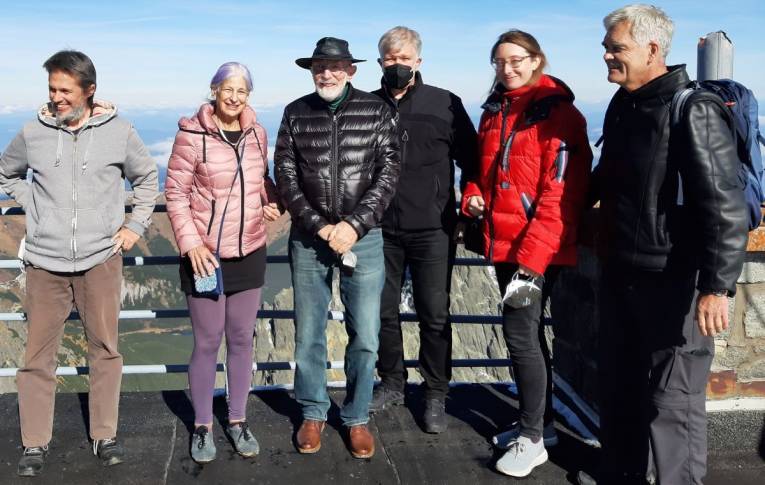 On Sunday, October 17, 2021, Nobel Laureate in Physics, Professor Kip Thorne, visited the Lomnický štít Observatory together with his wife Carolee Joyce and granddaughter Larisa Thorne, a physicist too, accompanied by Anton Zajac from the ESET Foundation, who suggested this visit to guests as a programme for the last day of their stay in Slovakia.

After a demanding week in Bratislava full of PR activities, they came to the High Tatras and spent almost an hour inspecting the workplaces and equipment of the Institute of Experimental Physics SAS and the Astronomical Institute SAS at the Lomnický štít Observatory.

First, the head of the Department of Space Physics at ÚEF SAV in Košice, Pavol Bobík, informed the guests about the focus, research and rich history of the department. His collaborators Ronald Langer and Ján Kubančák acquainted the guests with the physics and technique of measuring cosmic rays and showed the guests the cosmic-ray neutron detectors (NM-64 and SEVAN) in a measuring house on the roof of the building.

The guests then moved to the dome of the Observatory, where the staff of AsÚ SAV Ján Rybák and Michal Trembáč introduced them to the unique scientific focus and instrumentation of the Observatory. Despite the sparse altitude clouds, the guests were able to see through the CoMP-S device a protuberance above the edge of the solar disk due to its intense radiation in the H alpha spectral line. The guests' questions concerned the next plans for new observations, and the staff of the AsÚ SAV also informed him about the Observatory's involvement in international projects.

Kip Thorn mentioned that as a little boy more than 70 years ago, he was influenced by a visit to a similarly focused observatory Climax in the USA, where a lot of attention was paid to him, and it was also this experience from childhood that guided him to the natural sciences.

Kip S. Thorne is a well-known American physicist, an expert in gravitational physics and astrophysics, with a focus on relativistic stars, black holes, and gravitational waves. He held the Feynman professorship at CALTECH until his retirement. He is one of three scientists who were awarded the 2017 Nobel Prize for the first direct detection and observation of gravitational waves. He also made the history of science fiction movies as the scientific advisor to Christopher Nolan’s Hollywood blockbuster Interstellar.