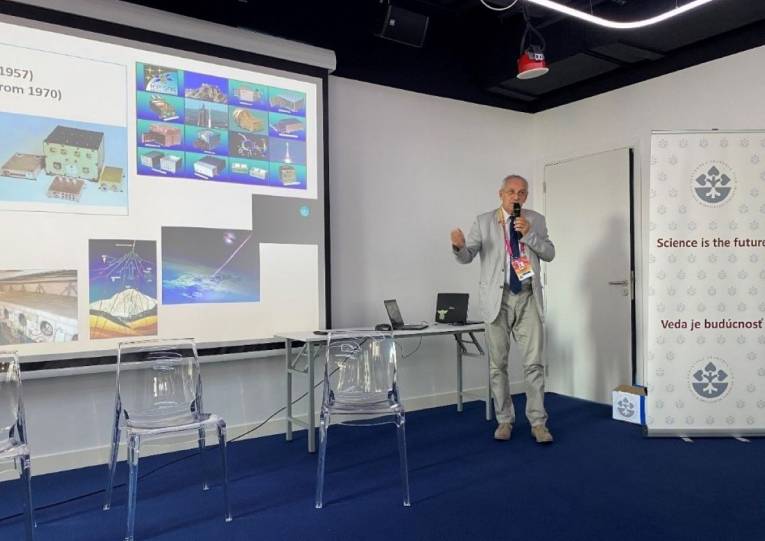 SAS presenting itself at the EXPO World Exhibition in Dubai

On Sunday, October 17, 2021, began the ´Space Week´ at the EXPO World Exhibition in Dubai. It is one of the ten thematic weeks of the World Exhibition, the task of which is to find solutions to the most current challenges of today. This week, the exposition of the Slovak pavilion also includes the Slovak Academy of Sciences with workplaces that carry out world-class space and materials research. The topic of space will dominate at the EXPO until October 23, 2021.

“When an event of such significance as a world exhibition takes place, it is difficult to imagine the Slovak Republic presenting itself without the contribution of the Slovak Academy of Sciences with the best scientific results it has," stated the President of the SAS, Professor Pavol Šajgalík before the opening of Space Week in Dubai.

The main programme of the ´Space Week´ in the Slovak pavilion began with a conference with the participation of the State Secretary of the Ministry of Education, Science, Research and Sports of the Slovak Republic, Ľudovít Paulis, and the State Secretary of the Ministry of Defence of the Slovak Republic, Marian Majer. Aleš Kučera from the Astronomical Institute SAS gave a lecture on the potential of the SAS in space research.

Part of the presentation of the Institute of Experimental Physics SAS at EXPO is a digital exhibit called ‘SPACE LAB SLOVAKIA’, which presents the institute as a reliable partner of space missions with more than 50 years of history. Scientists from the institute participated in the development of the first own space device SK-1, which was launched into space in 1977 aboard the Interkozmos-17 mission, participated in the Czech and Slovak MAGION satellite programme and currently contributes to ground-breaking missions of the European Space Agency (ESA): Rosetta, BepiColombo or JUICE. During the professional programme of Space Week, the representative of the Institute of Astrophysics, Šimon Mackovjak, will present a lecture entitled ‘Towards autonomous space safety’ to the visitors of the Slovak pavilion.

The series of professional lectures are complemented by a contribution by the Director of the Institute of Physics SAS, Mário Ziman, who, in collaboration with Professor Vladimír Bužek, is a leading personality in quantum technology research, prepared a lecture entitled The Future is Quantum.

New materials from the workshop of the Institute of Materials and Machine Mechanics SAS are also opening the way for future space research. As part of the ´Space Week´, the institute in Dubai presents its model of a heat shield made of aluminium foam in the shape of a parable. Its original design makes it possible to maintain a constant temperature difference between the internal and external sides in a suitable orbit. This can be used for continuous generation of mechanical, or rather electric energy even in the absence of several hours of sunlight.

The second exhibit is a composite based on magnesium reinforced with carbon fibres. Components made from it have strength and rigidity exceeding the properties of steel components, but their weight is 5 times lower. The support base of the exhibited parable is made of this composite.

The last exhibit of the institute is a superconductor with a light sheath made of ultra-fine-grained aluminium, which gives it high strength at minimum weight. In the conditions of low temperature and microgravity in orbit, it can therefore also be advantageously used as a generator of electric current, which is generated in it when it intersects Earth´s magnetic field as a long wire suspended on a satellite orbiting it. It is the high strength at the minimum weight that creates the precondition for the production of wire of sufficient length, while the superconductivity minimises resistance losses.

Among the exhibitors at the EXPO World Exhibition are mainly private companies that will present their products. Although the Slovak Academy of Sciences focuses primarily on basic research, the acquired expertise and know-how may be of interest to future potential partners.

The digital exhibit of ÚEF SAV is available HERE.

Fotogalery SAS at the EXPO World Exhibition in Dubai