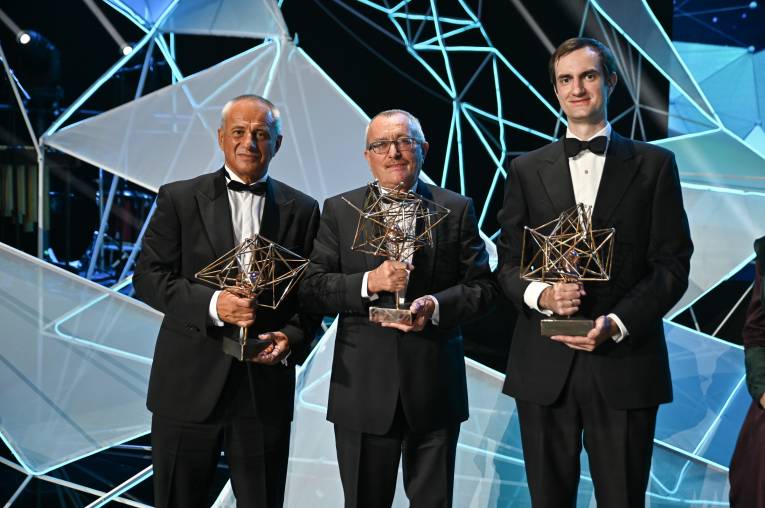 The International Commission, chaired by Nobel Laureate in Physics Kip Thorne, has selected the winners of the ESET Science Award. In the main category, Outstanding Individual Contributor to Slovak Science, the award was accepted by the material physicist Ján Dusza directly from Professor Kip Thorn. Ladislav Valkovič won in the category of the Exceptional Young Scientist Under the Age of 35, and Jozef Zajac received the award in the Outstanding Academic category.

On Saturday, October 16, 2021, with the participation of the President of the Slovak Republic Zuzana Čaputová and the Prime Minister of the Slovak Republic Eduard Heger, a solemn announcement of the winners of the ESET Science Award took place. For the third year in a row, the award pays tribute to top scientists who are the personification of excellent science in Slovakia and internationally, and their scientific work and results are beneficial for various spheres of society.

At the beginning of the event, President Zuzana Čaputová addressed the audience. She thanked the scientists and highlighted their work during the pandemic. She apologized to them for the attacks they had faced recently. She stated that instead of defending the chosen procedures, scientists have to repeatedly explain basic scientific facts and knowledge, although it is often, in her words, a futile effort.

“Therefore, I really appreciate that you do not withdraw your helping hand, even if some people attack you or your loved ones irrationally and painfully. I believe that for the most part, it is the fear of the unknown and the frustration rather than the real hatred that drives them to take action - often in virtual space - which, however, hurts as much as if it happened outside of virtual space. I feel I have to say: "I'm sorry," she addressed the scientists.

The Prime Minister of the Slovak Republic, Eduard Heger, also emphasised that the reform of science and innovation policy is key to the country's successful future. Its aim will not be to determine what the persons should study but to give scientists space to ask basic scientific questions about how the world works.

“We want to create a space for our scientists, from the smallest researchers in kindergartens to today's laureates, to ask fundamental scientific questions about the functioning of the universe and the world, but also about our place in it," he assured. “Without unnecessary bureaucratic exercises and binding conditions," he said, adding that the support of the top science and research is one of the basic pillars of the recovery and resilience plan.

Laureates of all three categories are selected based on the demanding criteria, including current scientific and research results and publications, measurable scientometric data, as well as communication and popularization, collaboration with other scientific disciplines, feedback from close collaborators or students and much more.

The Chairman of the International Commission, Kip Thorne, who presented the award in the main category, praised the world-class level of Slovak scientists after the final meeting of the Commission: "The selection of laureates was again extremely challenging this year, as all finalists are excellent in their fields. This confirms the fact that science in Slovakia has an international quality. However, large scientific projects require not only excellent science, but also the support of public and private institutions and, therefore, I wish the finalists to find such support for their research. The ESET Science Award is an important example of such support.”

This year's gala evening was also attended by an International Commission that selected the winners of two main categories - Outstanding Individual Contributor to Slovak Science and Exceptional Young Scientist Under the Age of 35. In addition to Professor Kip Thorn, members of the International Commission included biologist Fiona Watt, chemist and philanthropist Hana Dvořáková, professor of inorganic chemistry Ralf Riedel and Professor of mathematics Tibor Krisztin. The laureate of the Outstanding Academic category was selected by a domestic Commission composed of representatives of Slovak universities.

Ján Dusza from the Institute of Materials Research SAS in Košice became the laureate of the category Outstanding Individual Contributor to Slovak Science. In his speech, he thanked his doctoral students and collaborators from Košice, Bratislava and Trenčín.

"I'm moved. As a materials researcher, I didn't expect it at all. It's fantastic to be here as a winner, to hold a discussion with the President, with the Prime Minister, with such greats as Professor Thorne and others. It's something unreal. I will soon be 70 years old, I have received several awards, but this is the maximum I have ever received. I am speechless,” added the laureate after the end of the program.

Ján Dusza has devoted his entire professional life to the research and development of progressive ceramic materials. The properties of these materials render them suitable for use in the most demanding conditions in terms of temperature and mechanical stress in aggressive environments.  The native of Gemer comes from an agricultural family, but thanks to his uncle adopted an educational focus on physics. He was also significantly influenced by a later stay in Stuttgart, at that time one of the best workplaces in the world for research in the field of progressive ceramic materials.  However, his professional scientific career is associated with Košice. There, along with other colleagues, he founded the PROMATECH Research Center, which generates world-class results.

The winner of the category Exceptional Young Scientist Under the Age of 35 is Ladislav Valkovič, who works at the Institute of Measurement Science (SAS) and the Oxford Centre for Clinical Magnetic Resonance Research at the University of Oxford. When accepting the award, he thanked his family, close associates and all those standing behind his research.

“I didn't expect it. I came here as if to the theatre for a pleasant evening and a program in which I will see how people support science and how someone will be awarded. That is why I was shocked when I won the award. And as I said, it's all about collaboration, it's about the people behind this research. It's not me, but a whole team of researchers, and of course this award belongs to them as well,” said the award-winning young scientist, who tries to support his students, for example through short stays at the University of Oxford. “Science abroad is not easy, it's a big challenge. I take graduates and doctoral students to Oxford for at least one semester to try it out and to return to Slovakia with this experience. In Slovakia, there are opportunities to do science well, if there is equipment and support, and it is definitely worth doing science in Slovakia,” added the young laureate.

In his research, Ladislav Valkovič focuses on how to measure the metabolism of the heart and other internal organs as quickly, accurately and non-invasively as possible. He works on the development and application of non-invasive methods for measuring tissue metabolism using magnetic resonance imaging. Lately, he has mainly been focusing on the human heart.  He considers his greatest achievements to date to be the development of a rapid method for measuring metabolic processes in muscles, which allows them to be measured during exercise, and a non-invasive method for measuring metabolic processes in the liver. Having completed his studies in biomedical engineering in Žilina, he worked at the Medical University in Vienna and the Slovak Academy of Sciences.  During a research stay in Zurich, he became interested in metabolic imaging.

Since 2015, in addition to the SAS, he has been working on the measurement of heart metabolism at the University of Oxford.

Two of the three main categories in the competition were filled by scientists from the Slovak Academy of Sciences. Its President, Professor Pavol Šajgalík, was also satisfied with the result.

"I am really happy that we have succeeded. In the category of Young Scientist, we succeeded for the second time in a row, which gives us hope that the SAS has perhaps a good policy of educating young talents who are being recognized. Even today, it was seen that the laureate of the Exceptional Young Scientist Under the Age of 35 category works at the world-known research institute in Oxford, but at the same time has close contact with his home workplace. This should be the way - that we learn from the best but bring that knowledge home. For obvious reasons, I am happy that we also have the main prize, because it is very important and I am all the more looking forward to it going to the field of materials research, which is very dear to my heart,” he said after the ceremony.

More information about the awarded laureates can be found at: https://www.esetscienceaward.sk/sk

The recording of the solemn announcement of the laureates is available in the RTVS archive archíve RTVS. 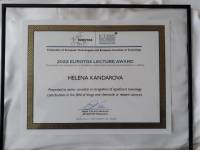