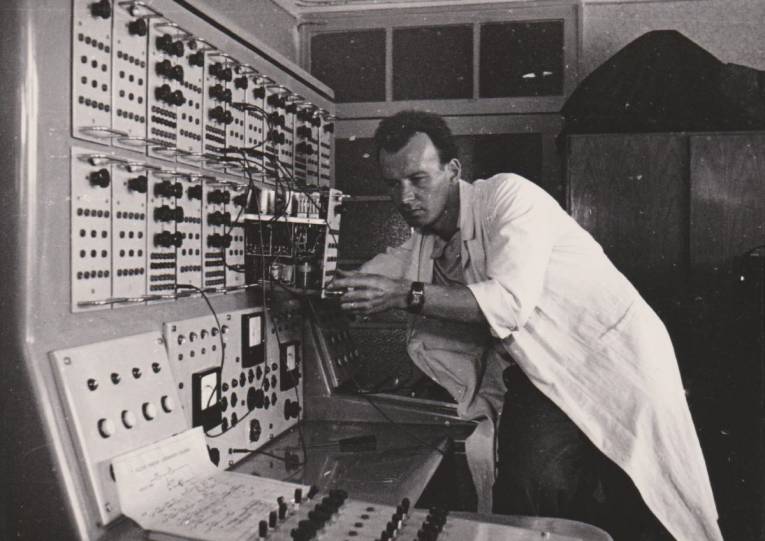 Exactly 65 years ago, on October 15, 1956, the first electronic computer component was created in Slovakia. It was constructed by Ivan Plander, a pioneer of informatics and computer technology from the Laboratory of Theoretical and Applied Mechanics SAS. The name of the component was Computer Amplifier (of analogue computer computing unit), and it formed the basis of the future first analogue computer.

“The amplifier consisted of two connected parts: an AC amplifier and a DC amplifier. Together, they created a precision computing amplifier with a gain of a hundred million times. Using it, the basic computing units of the analogue computer, the so-called Sumator and Integrator, were subsequently designed,” explains Martin Šperka, Head of the Computer Museum in the Computing Center of the Center of Operations SAS.

After the construction of the basic computing units, the entire analogue computer was designed, which was put into operation in 1958 at the Slovak Academy of Sciences and functioned until 1970. It was used to calculate the parameters of moving machines and to model them at work. It calculated, for example, the oscillation of the bent motor shafts, the flexible mounting of the incubator in the ambulance, the flexible mounting of the motors, but also the mechanical properties of carbon materials for electrical engineering. Its advantage was that the computing unit was displayed on the computer as 100V. For comparison, the computing unit of the computer made by the French manufacturer DJINN, which was already purchased as used in the SAS in 1957, had a value of only 10V, therefore, it had lower accuracy.

“A common problem of Czechoslovak scientists at that time was embargoes and foreign exchange, which Plander's analogue computer avoided by its own design. Plander also designed and constructed nonlinear units for his computer, such as multipliers that the DJINN did not have. It is good to realise that in 1956, whole teams of experts in computer development worked in the Czech Republic and in Slovakia it was only one scientist, still a doctoral student at the SAS, Ivan Plander,” Štefan Kohút, the founder of the Computer Museum emphasises the contribution of the designer Plander.

Today, the analogue computer is exhibited in the Computer Museum of the Center of Operations SAS at Patrónka in Bratislava and is its rarest and oldest exhibit.