ESA-BepiColombo spacecraft to fly around the planet Mercury

On Saturday, October 2, 2021, at 1.34 a.m. CET, the BepiColombo spacecraft will approach planet Mercury after three years of flight and fly around it at a distance of 200 kilometres. It is the first of a series of six scheduled close flights. Subsequently, the probe will be captured in Mercury's orbit in December 2025 and will focus on studying the planet. The Slovak Academy of Sciences and Slovak technology companies also contributed to the development and construction of the probe's scientific instrumentation.

The scientific load of the probe also includes a complex particle apparatus SERENA (Search for Exospheric Refilling and Emitted Natural Abundances) and its so-called ion camera PICAM (Planetary Ion CAMera), to the construction of which the Institute of Experimental Physics SAS in Košice contributed.

"PICAM is a mass spectrometer that will analyse atoms released, ionised and escaping into space from the surface of Mercury. It happens under the influence of intense sunlight to which the planet is exposed. The analysis of these escaping atoms will bring valuable knowledge about the surface composition of the planet,” explains one of the designers of the spectrometer Ján Baláž from the Institute of Experimental Physics SAS in Košice contributed in Košice.

He participated in the preparation of the mission in cooperation with Irish and Austrian scientific institutions, while important mechanical parts of the PICAM camera were manufactured by the Slovak technology company Q-Products. During Saturday's flight, practically all scientific instruments will be activated, including the SERENA complex.

The great technological challenge of the mission is the reliable operation of scientific apparatus in a thermal and radiation-inhospitable environment, as the sunlight of Mercury is up to ten times more intense than on Earth.

The BepiColombo spacecraft launched to Mercury in October 2018. Named in honour of the Italian astronomer Giuseppe 'Bepi' Colombo, it aims to significantly expand knowledge about the formation of the solar system and the evolution of planets near the parent star. 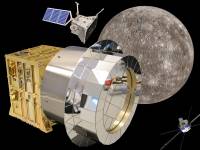 Comet NEOWISE to shine in the sky once again
Read more >>