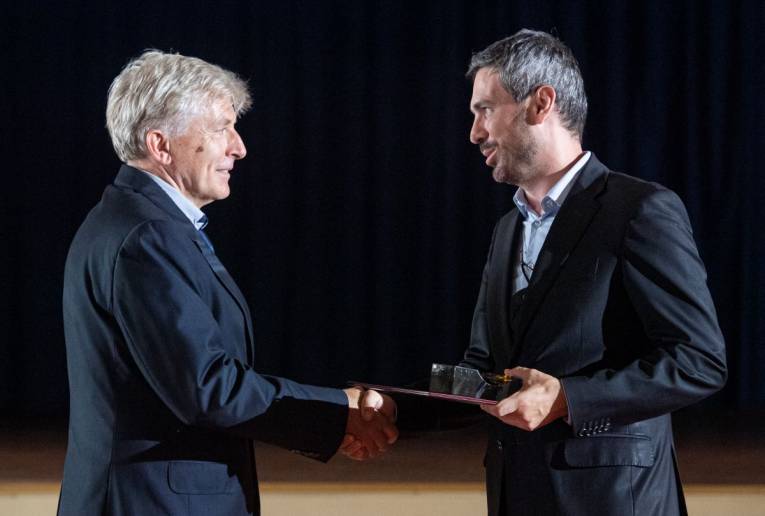 Imrich Barák from SAS is the Scientist of the Year 2020

The Slovak Academy of Sciences has once again confirmed that it has top scientists in its ranks. RNDr. Imrich Barák, DrSc., from the Institute of Molecular Biology SAS, became the scientist of 2020 for unique results in the field of bacterial physiology and the discovery of the formation of bacterial nanotubes as a manifestation of a dying cell. The title of Innovator of the Year 2020 was awarded to RNDr. Boris Klempa, DrSc., from the Institute of Virology BMC SAV for innovative research of new SARS-CoV-2 diagnostic methods usable for testing children in schools, participation in the development of Slovak PCR tests and representation of Slovakia in the project of the European virus archive EVA-GLOBAL. The announcement of the results of the Scientist of the Year took place on Tuesday, June 29, in the Moyzes Hall of the Faculty of Arts, Comenius University in Bratislava.

"We live in a time when we can observe the smallest particles of matter, we can look into space, travel to Mars or the Moon... And then, suddenly, a small virus comes and stops almost the whole world. It derails our whole way of life, which may not be so negative. The problem is that it kills millions of people and directly or indirectly causes suffering to millions more,” said Imrich Barák, Scientist of the Year 2020, in his thank-you speech. He emphasised that this period also brought a lot of misinformation and fear. “The best cure for fear is to understand natural phenomena and knowledge. One can acquire knowledge through science. Society should therefore learn to listen to science and scientists, not only so that we can prevent disasters, but also so that we can live in greater harmony with all of nature.“

The pandemic has taught the virologist Boris Klempa, the Innovator of 2020, a lot. He became one of the “faces of scientists”. “I have learned that I can rely on my colleagues in many ways. This pandemic is difficult and any feedback helps and encourages. I am very grateful and appreciate this award. I perceive it as a thank you not only to me personally, but to the whole team from the Biomedical Research Center SAS, which was involved in the solution during the pandemic. At the same time, the pandemic turned the whole of our scientific work upside down, because it was a new topic, which we “became engaged with” one hundred per cent,” Boris Klempa emphasised in his speech and added that he is also glad that he and his colleagues can slowly return to their original topics.

The ceremony was also attended by Dušan Jaura, Director of the Internal Policy Department of the Office of the President of the Slovak Republic, Ľudovít Paulis, State Secretary of the Ministry of Education, Science, Research and Sports, and representatives of the main organizers of the event: Pavol Šajgalík, Director General of the Slovak Centre of Scientific and Technical Information, prof. Ján Kyselovič and prof. Dušan Petráš, President of the Association of Slovak Scientific and Technological Societies.

The aim of the Scientist of the Year event, which has taken place already 24 times, is to professionally and socially highlight the most important personalities of scientific life, as well as the best-achieved results in science and research in Slovakia. As Imrich Barák, the Scientist of the Year 2020, concluded, “recognition belongs not only to us scientists, but to all those who support science and those who believe in science.”