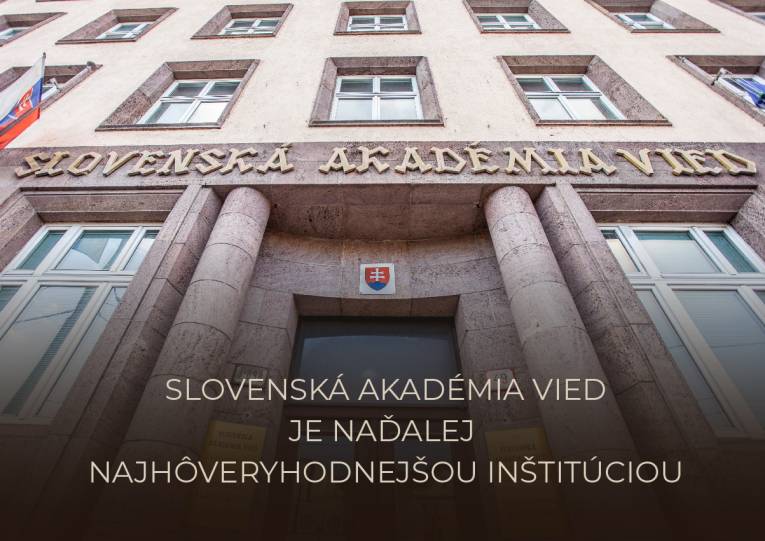 Slovak Academy of Sciences remains the most credible institution

A representative survey of the credibility of institutions, carried out by the FOCUS agency at the beginning of June 2021, confirmed the stability of the position of the Slovak Academy of Sciences. It is the most credible institution among the fifteen institutions compared in Slovakia. The results confirmed that 74% of respondents completely or rather trust the SAS.

"There is a motto in sport - It is easy to achieve success; it is difficult to maintain it. From this point of view, I am very pleased that we are maintaining the same leading position in the fourth survey in a row,“ said the President of the SAS, Professor Pavol Šajgalík.

Confidence in SAS is consistently high across Slovak society. All age groups have trust in it, regardless of the respondents' education or profession. The lowest share of respondents, who could not answer the question of credibility of SAS, was among university-educated respondents.

"I consider the fact that people who trust the SAS are stratified as the most important. They are no longer just pensioners, but we are also entering other age categories, and I was surprised to find that trust is rising even in the case of people who do not have a university education. This brings us to a space that we wanted to occupy to some extent, because even in relation to conspiracy theories, the voice of the Academy must be heard and it must affect especially those who receive such theories and unsubstantiated messages. From this point of view, this latest public opinion survey is even more significant for us than the previous ones,” added Professor Pavol Šajgalík.

"I consider the result as a good certificate for SAS as a national scientific institution. Compared to last year's record levels of credibility measured in the early stages of a pandemic, which were associated with a universally high degree of unity and a higher level of general trust, the SAS maintained the same high level of credibility in 2021. At the same time, in comparison with the period a year ago, trust in institutions in Slovakia is rather lower in 2021. A good certificate for the SAS is also the declining share of respondents who cannot express themselves when asked about their trust in the SAS,“ stated Miloslav Bahna from the Institute for Sociology SAS.