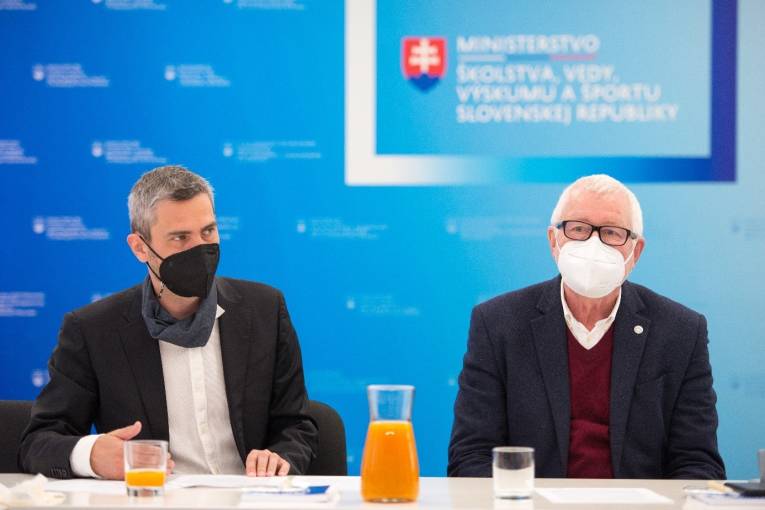 The Government of the Slovak Republic enacted amendments to Act No. 133/2002 Coll. on the Slovak Academy of Sciences and Act No. 243/2017 Coll. on a public research institution submitted by the Ministry of Education, Science, Research and Sport of the Slovak Republic at its meeting on Wednesday, April 26. Both laws will make it possible to achieve the transformation of the economic form of the SAS institutes from the state budget and contributory organisations to public research institutions.

At a meeting with journalists, the State Secretary of the Ministry of Education, Ľudovít Paulis, explained the need to amend both laws and emphasised that the current Government had committed itself to completing the transformation of the SAS in its mission statement.

"The Act on SAS will now determine only the Slovak Academy of Sciences itself, its tasks, internal processes or ways of creating leadership. All processes related to SAS institutes will be transferred to the Public Research Institution Act," explained the State Secretary, Ľudovít Paulis, adding that the process of transforming the SAS institutes into a new legal form is set in the new VVI Act to be automatic and to minimize bureaucratic acts without substantive justification.

If the amendments to the laws in the parliament pass both readings, they could enter into force on November 1, 2021. The SAS organisations will then have 2 months to prepare for the transformation that will take place on January 1, 2022.

The change of the economic form of SAS institutes to public research institutions will enable SAS organisations to become part of the ecosystem of registration and evaluation of research activities, to cooperate with universities and to participate in business development and innovation. A benefit is also expected in the form of opening up the management and strategic direction of individual SAS organisations to the public. In public research institutions, the external component will be represented on scientific and supervisory boards, and, at the same time, the role of the public will be strengthened at the SAS level by strengthening the powers of the Scientific Council, half (-1) of which will be elected by the Slovak Government Council for Science, Technology and Innovations.

At the meeting with journalists, the President of the SAS, Pavol Šajgalík, emphasised that the transformation of the SAS institutes into the VVI is a very significant change also because the SAS institutes will become the owners of the property instead of property administrators. "I want to point out here that we do not only manage real property, I even think that we manage real property very well, as evidenced by the castle in Smolenice. It is an example of how a state institution can manage state property when it has a connection to it. But even more important for us is the intellectual property, which we also manage," explained Pavol Šajgalík, adding that in the case of scientific-research institutions, intellectual property, in particular, is the final product of scientific work.

The transformation of the SAS was first approved by the Assembly of the SAS in 2013. Pavol Šajgalík sees the blocked transformation from 2018 as an experience that taught the entire SAS a lot and provided it with the opportunity to thoroughly prepare for this process.

"Today, I would like to specially thank the Secretary of State, Ľudovít Paulis, for his patience with which he participated in the meetings of the SAS Assembly. The cooperation with the Ministry of Education was really exceptional. We worked intensively to get to this point and today, we have a reasonable hope that even if we get 2 months to prepare for the transformation, we will be able to manage it," concluded the President of the SAS.