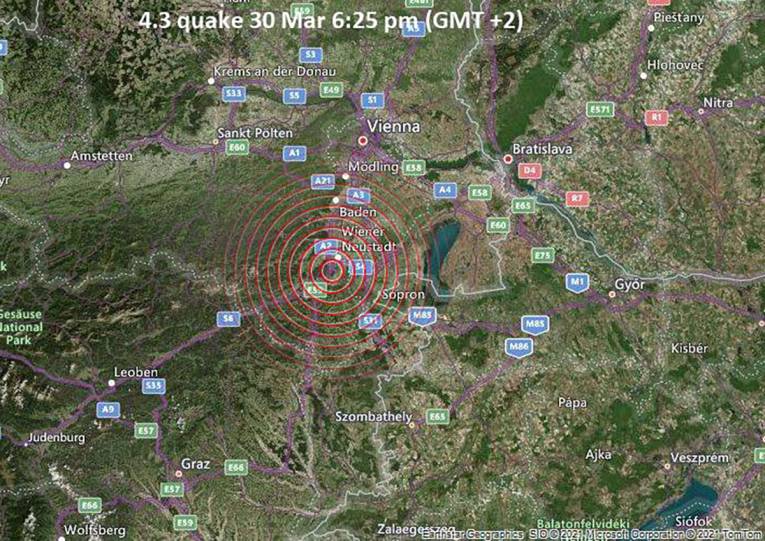 On Tuesday, March 30 at 18:25 winter CET (16:25 World Time), the seismic stations of the National Network of Seismic Stations (NSSS), operated by the Earth Science Institute of the SAS and the Local Seismic Network of Eastern Slovakia (LSNES), operated by the Faculty of Mathematics, Physics and Informatics of the Comenius University in Bratislava recorded an earthquake from the focal zone of Wiener Neustadt. Its epicentre was about 5 km south-west of the city Wiener Neustadt.

The earthquake had a magnitude of 4.2 and a preliminary hypocentral depth of 11 km below sea level. The earthquake was also recorded macroseismically. The primary information for TASR was confirmed by Kristián Csicsay, Head of the Department of Seismology at the Earth Science Institute of the SAS.

So far, 65 macroseismic questionnaires, mostly from Bratislava and surrounding municipalities, have been sent electronically to the ÚVZ SAV.

The seismic activity in the ​​Wiener Neustadt area is linked to the geologically complicated contact between the Eastern Alps and the Western Carpathians in the Vienna Basin. The area is part of a large fault system that stretches from eastern Austria through the westernmost part of Slovakia - the so-called tectonic line Mur - Mürz - Leitha, with extension to the most seismically active area in Slovakia - around Dobrá Voda. The tectonic zone from the eastern end of the Alps has several segments, the most active one is the Mittendorf/Schwandorf segment. The tectonic line Mur - Mürz - Leitha in the direction SW - NE is also significant in morphology. It is crossed by important road and rail connections between Vienna, Semmering, Leoben towards Carinthia. The focal mechanism of the earthquake from March 30 near Neunkirchen is in line with the expected activity on the fault line, which manifests itself as a combination of a lateral movement and a drop fracture.

Earthquakes are not exceptional in this area. In the last 25 years, we have felt seven earthquakes with an epicentre in this region in Slovakia:

Data on the current earthquake will be further analysed and kept up-to-date.