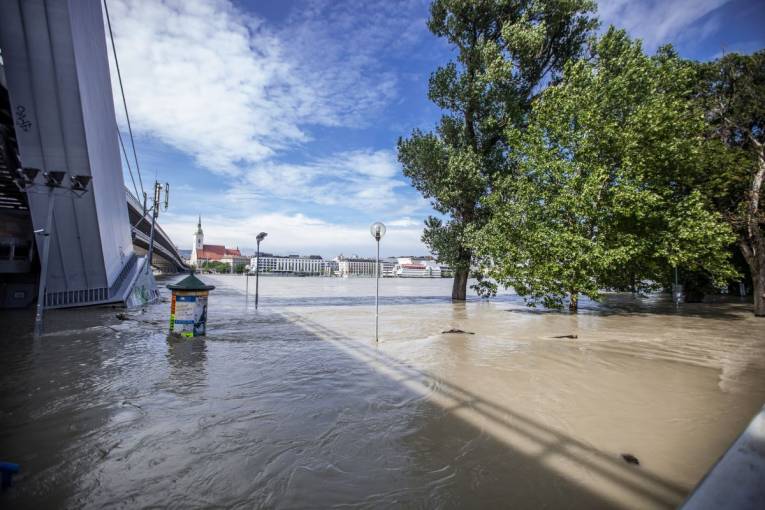 The opinion prevails currently that such droughts and, at the same time, floods as we have in Slovakia in recent years, have never been here before. However, RNDr. Pavla Pekárová, DrSc., from the Institute of Hydrology SAS, who has been dealing with the issue already for thirty years, clearly disagrees.

“Floods are part of the water cycle in nature and occurred hundreds of millions of years before man evolved,” reasons the scientist at the beginning of the World Water Day, and adds that floods are a natural phenomenon that belongs to our region. "It is not unnatural. Floods and droughts have always occurred in our territory, even at a time when it has not yet been inhabited,” she explains. According to her, though, the statistical evaluation of floods must be based on specific measurements of flows on rivers.

Observations at the water meter station on the Danube in Bratislava began as early as 1821, and in Komárno, actually, the measurement of water status began as early as 1805. “Measuring the Danube water flow belongs to the oldest one in Europe,” explains P. Pekárová from the historical point of view.  According to long-term statistics, the driest year was 1934, the rainiest was 1965. The last years of the most recent history - until 2013, were dry, but, according to P. Pekárová, the long-term average of Danube flows in Bratislava can be considered constant.  “Flows were extremely high during the war years from 1937 to 1941. This year was again preceded by extremely dry years,” clarifies the scientist

The last years of our history have been very dry again. So what can we expect according to the expert? Drought or cyclic rainy years? “My motto is: the dry and rainy periods change just like the day/night or winter/summer does,” she says.

The flows of the Danube fluctuate

"The average annual flow of the Danube fluctuates from 1400 m3/s to 3000 m3/s. The maximum peak flow of the extreme flood in Bratislava exceeds up to 10,000 cubic metres. During the observation period, there were five floods on the Danube with a flow of over 10,000 cubic metres of water per second - namely in 1897,1899,1954, 2002 and 2013. If we lived in 1953 and had 50-year observations of Danube flows, we could say that the maximum flow of the Danube does not exceed 9000 m3/s. It is clear from this that even 50 years of flow observations are not enough to capture the height of an extreme century-old flood. When estimating 1000-year old floods, it is, therefore necessary, to use historical descriptions and compile graphs of when such floods probably occurred,” describes P. Pekárová.

According to the estimate of the Austrian hydrologist Kresser in 1957, the flow of the Danube in Hainburg and thus also in Bratislava exceeded 13,000 cubic metres in 1501. “We consider this flood to be the worst in the last 1000 years on the upper Danube. Austrian hydrologists came to this conclusion on the basis of flood signs from Passau to Vienna. The marks also document that this flood was higher than the catastrophic flood of 2013,” the scientist states. In the past, a flood mark from 1501 also existed at the entrance of the Vydrická brána to the old centre of Bratislava from Vienna.

The largest known flood with catastrophic consequences hit Slovakia in August 1813 on the feast of St. Bartholomew (August 24). It was caused by regional long-lasting rains, which also affected the territory of today's southern Poland, Moravia and northern Hungary. “The flood year of 2010 did not reach the dimensions of this flood by far,” observes P. Pekárová. Already after the flood in 1775, Mária Terézia ordered to mark the height of water on all churches in the Váh basin. However, many of these marks have been lost or relocated. One such mark has been preserved in Trenčín. Based on the preserved marks, experts estimated the water flow in 1813 to be 1000 cubic metres in the town of Liptovský Mikuláš. (For comparison: the largest flood during the observation period (1921 - 2019) from 1958 did not reach even 600 cubic metres.) Other preserved flood marks are also connected to the flood of 1813, for example in the lower Váh, the flood mark was located on the manor house in Brunovce. The flood of 1813 was also recorded on the river Hron, as evidenced by the mark on the walls in Banská Bystrica. "Preserved flood marks are very diverse, written in Bernolák´s writing, Latin, German or Hungarian. Their descriptions are preserved in local chronicles and registries in Slovakia and Hungary,” says P. Pekárová, who is intensively involved in this area.

And when will the next flood be? “History will not tell us. From the studies in our territory, however, we can say that a really big flood is likely to occur in the summer of August,” comments Pavla Pekárová from the Institute of Hydrology SAS on today's World Water Day.

You can find more about floods and flood marks HERE.