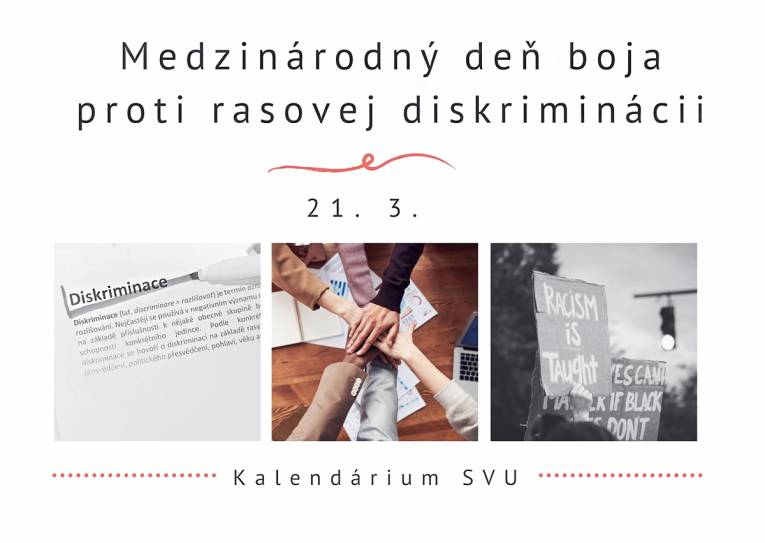 Racism is also a problem of Slovakia

Every year, the United Nations commemorates March 21 as an International Day for the Elimination of Racial Discrimination. On this occasion, the United Nations organisation declares each year a specific theme that seeks to promote a culture of tolerance and equality.

This year's theme, Youth Against Racism, reflects last year's massive involvement of young people in protests known as  Black Lives Matter). With this message, the UN wants to emphasise the role of young generations in the fight against racism, because, despite the pandemic situation and the security measures of state authorities, they were able to encourage the necessary debate in the country on criminal justice reform.

This year's legacy also has its global dimension associated with the COVID-19 pandemic. That is, the pandemic situation has revealed the hitherto little-analysed structural inequalities between people of different skin colours, which to a greater extent result in job losses, police checks, increased deaths and deteriorating mental health in the non-white population. As Sandra Shullman, President of the American Psychological Association, said, "we live in a pandemic of racism.”

Mutations in racism in the post-racial era

After the end of World War II, there was some hope that humanity would get rid of the discriminatory and degrading hierarchy of people of different skin colour. The collective trauma of the Holocaust, the advanced decolonisation process, and the research findings of the evolutionary biologist Richard Lewontin of 1972 on the non-existence of genetic conditionality of races significantly eliminated the development of pseudo-scientific biological racism. On the other hand, the historical legacy of imperialism, colonialism, and the common notion of white supremacy mean that the human races continue to "live their lives" in real life as socio-political constructs.

Thus, new forms of latent racism have evolved from biological racism. According to scientific definitions, individuals commit racist behaviour not only by explicit allusions and swearing at the individual level, but also when they feel resistance to people of another race (aversive racism). Then the structural problem is institutional racism, a set of systematic policies and practices that disadvantage racial and ethnic minorities in equal opportunities and service provision.

As these practices are legalised by the political system, the category of race seems to be losing relevance in such societies. However, the South African philosopher David Theo Goldberg claims that it is exactly the opposite. According to Goldberg, we are in a post-racial era in which, although the race has been invisible by neoliberal policies, it is, in fact, a basic organisational logic under which the majority communities seek to maintain dominance in their own national states while preserving as much degree as possible of their racial homogeneity.

A typical example of a post-socialised political structure is the Slovak Republic. According to the Dutch-German philosopher and anthropologist Huub van Baar and the English sociologist Ryan Powell, the Roma minority in Slovakia is ostracised, while the problems of marginal Roma communities are in many respects depoliticised as unsolvable. In connection with the coronavirus pandemic, as in the case of African Americans and Asian Americans in the USA, the "racism epidemic" in Slovakia was particularly discriminatory against marginalised Roma communities, especially in the areas of insecure distance education, difficult access to health care, increased securitisation and quarantine ghettoization of entire community settlements.

The Slovak Republic is the country with the second-highest share of the Roma population in the total population of the country (9.02%) among the EU countries after Bulgaria (9.94%). The European Union has legislatively recognised the term anti-Gypsyism as an umbrella term for a specific form of racism directed against the Roma and implemented it into a group of Roma policies in order to eliminate discriminatory social structures reproducing inequalities.

Goldberg, D. Are We All Postracial Yet? Cambridge: Polity, 2015.

Today we commemorate the benefits of positive thinking
Read more >>