Mineralogists from the Earth Science Institute of the SAS discovered a new mineral – dobšináite – in the lodges around Dobšiná. As a holotype, it is white, a small admixture of cobalt causes it´s light pink tinge. At the beginning of February 2021, the Commission on New Minerals, Nomenclature and Classification of the International Mineralogical Association approved it as the 23rd new mineral found in the territory of Slovakia.

Dobšináite is a new member of the roselite group of minerals with a dominant calcium representation.  Roselite minerals belong to a relatively rare water-containing arsenates. It was named after the place of its first described occurrence - the town of Dobšiná, which has a rich mining history.

"The lodges around the town represent the most significant accumulation of nickel and cobalt in the Western Carpathians, and Dobšiná has been one of the most important producers of these metals in Europe in the past. Dobšináite was found in the Zember-Theresian venous system, where it occurs together with other secondary minerals such as erythritol, picropharmacolite and phaunouxite,” explains mineralogist Martin Števko from the Earth Science Institute of the SAS, who collaborates with colleagues from the National Museum in Prague, Masaryk University and the Moravian Museum in Brno, and the Institute of Physics of the Academy of Sciences of the Czech Republic and deserved to find this mineral.

The new mineral from Slovakia was also confirmed by chemical analysis with an electron probe microanalyser in the detached workplace of the Geological Department of the Earth Science Institute of the SAS in Banská Bystrica. 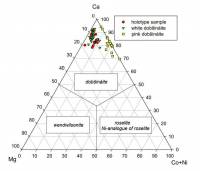 After dobšináit, Slovakia has another new mineral
Read more >>