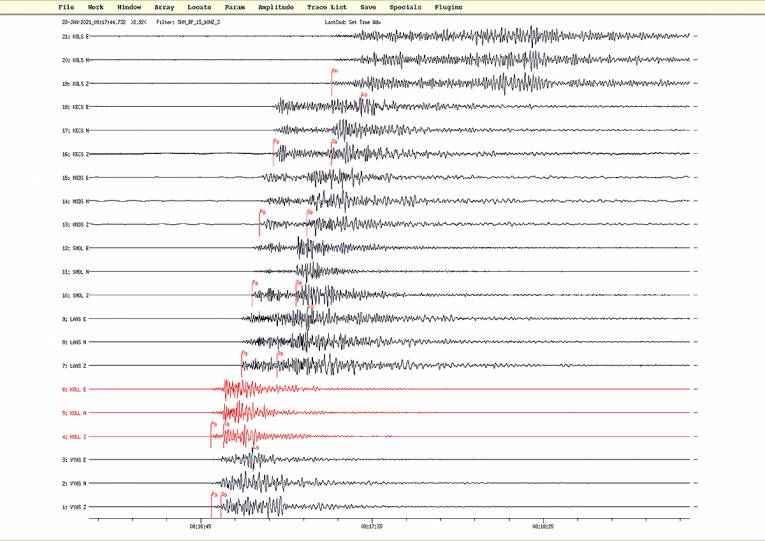 On Thursday, January 28, 2021, at 09:16 CET (8:16 of the Coordinated Universal Time - UTC), seismic stations of the National Network of Seismic Stations (NSSS) and the Local Seismic Network of Eastern Slovakia (LSNES), operated by the Earth Science Institute of the SAS and the Faculty of Mathematics, Physics and Informatics of the Comenius University in Bratislava, recorded an earthquake in the region of central Slovakia. Its epicentre was about 8 km south of the town of Handlová, near the village of Nová Lehota.

The earthquake had a magnitude of 3.2 and a preliminary hypocentral depth of 2 km below the earth's surface. The earthquake was also recorded macroseismically and the inhabitants near the epicentre subsequently also reacted to its effects. Primary information for TASR was confirmed by Kristian Csicsay, Head of the Department of Seismology at the Earth Science Institute of the Slovak Academy of Sciences. Within one hour after the earthquake, 36 macroseismic questionnaires from 11 localities in central Slovakia were sent electronically to the ÚVZ SAV (Earth Science Institute SAS), after three hours it was 138 reports from 27 localities. Current data on earthquake observations can be found HERE.

The epicentre of the earthquake in the foothills of the Vtáčnik mountain range was in the area of ​​brown coal mining of the Hornonitrianske mines of Prievidza. According to telephone information from HNB, a.s., the earthquake was also felt macroseismically in the mining buildings. However, the hypocentral depth (2 km) excludes a connection with the mining activity, which extends only to a depth of several hundred meters max. Geologically, it appears preliminarily that the hypocentre is located at the interface between the Tertiary fill of the Upper Nitra Basin and the pre-Tertiary subsoil (Mesozoic limestones and dolomites of the Choč Nappe). We can also rule out a connection with the volcanism that shaped the Vtáčnik Mountains during the younger Tertiary Period, more than 10 million years ago.

Earthquakes do not occur frequently in this area, we have information about two earthquakes from data that have been recorded and evaluated in the past by modern equipment and methods from existing seismic networks.

The NSSS did not record the earthquake, it was located in Lehota pod Vtáčnikom according to macroseismic effects from 6 localities. However, the earthquake was recorded by the local EMO network with ML = 2.9, which after conversion to moment magnitude gives Mw = 2.7.

During the period from 2010-2019, another 20 earthquakes were recorded in this area, with ML (local magnitude) 0-1, i.e. they were recorded only by equipment, without macroseismic effects.

Data on the current earthquake will be further analysed and kept up to date.