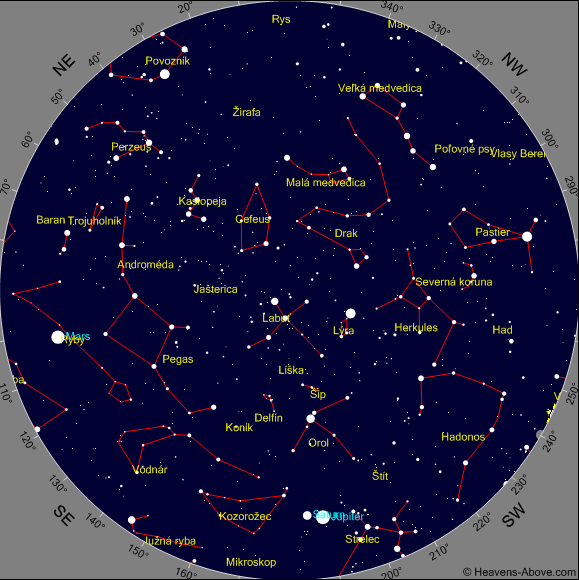 Jupiter and Saturn to "chase" each other in the night sky

"These two planets are visible these days in the evening sky low above the south-western horizon. You can see them on the attached map of the whole sky in the evening after sunset on the border of the constellations Sagittarius and Capricorn,” said Ján Svoreň from the Astronomical Institute SAS.

Both planets move to the left in the sky, but Jupiter faster than Saturn.

"If you watch them for several evenings, you will find that the distance between them decreases. Their closest approach (conjunction) will occur on December 21, 2020, immediately after sunset, when they will be only six angular minutes away in the sky (approximately 1/5 of the diameter of the lunar disc). The conjunctions of Jupiter and Saturn are repeated after about 20 years,” said Ján Svoreň.

However, according to the astronomer, this year's close conjunction is a rare phenomenon, as the last such close approach of these two planets occurred in 1623 and will not occur again until 2080. “After December 21, the planets will change positions, Jupiter will be on the left and Saturn will continue to be more and more on the right. If you want to watch this event, you need to find the time by the end of December. Later in January, both planets will set quickly after sunset and will be difficult to observe in the evening twilight,” added the astronomer.