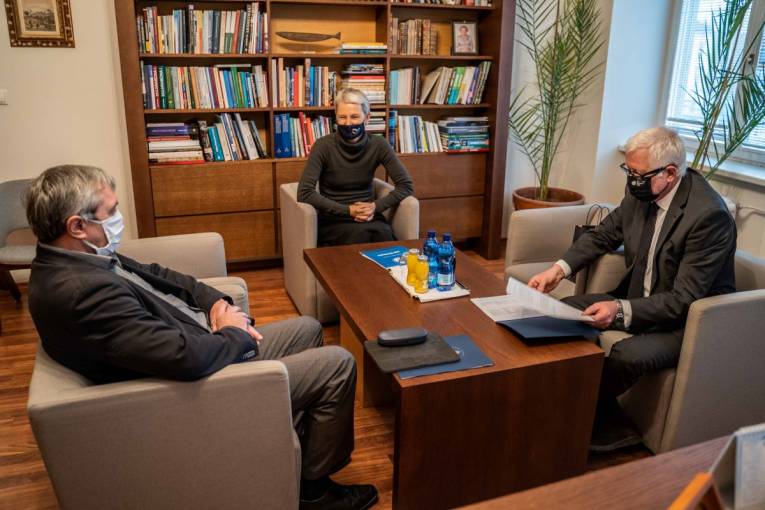 On Wednesday, November 11, the President of the SAS, Pavol Šajgalík, welcomed the Ambassador of the Federal Republic of Germany, J. E. Barbara Wolf, who recently assumed an office in Slovakia. Dušan Gálik, Vice President of the SAS for International Relations, was also present at the meeting.

The President of the SAS informed the German Ambassador about the structure and work of the Academy, he also praised the development of cooperation with universities - especially the Slovak University of Technology and the Comenius University in Bratislava, and with the Pavol Jozef Šafárik University and the University of Veterinary Medicine and Pharmacy in Košice, with which the SAS has signed memoranda of understanding.

The Ambassador was interested in the brain drain from Slovakia and its causes, as well as in how the SAS institutes are involved in research related to the coronavirus pandemic. She and the President of the SAS agreed that this difficult period is a challenge and, at the same time, an opportunity for scientists to prove the importance of scientific research for society.

The President of the SAS also mentioned the tools aimed at reversing the unfavourable trend of brain drain from Slovakia and getting post-doctoral students as well as quality foreign scientists working abroad back to Slovakia - the SASPRO program, which has already been completed, and its follow-up program SASPRO 2. Dušan Gálik, the Vice President of the SAS briefly reviewed the mutual cooperation between the SAS and scientific institutions in Germany, emphasising in particular the development of cooperation and the exchange of expertise between the SAS and agencies supporting scientific research in Germany.

Both Pavol Šajgalík and Barbara Wolf agreed that cooperation on a scientific basis is very intensive between the two countries, as evidenced by more than a hundred shared projects in various European project schemes in 2020.