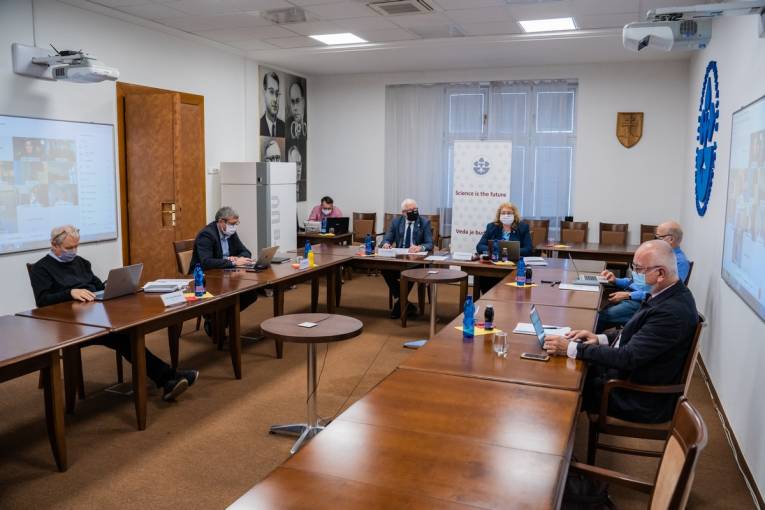 Representatives of the International Advisory Board (IAB) and the Slovak Academy of Sciences met at another, third, evaluation meeting. Considering the ongoing anti-pandemic measures, the meeting was held online.

After welcoming the President of the SAS, Pavol Šajgalík, and the introductory speech by Mária Omastová, member of the Presidium of SAS and Chairwoman of the Accreditation Commission of the SAS, the Vice Presidents of the individual Sections of Social Sciences spoke, including Pavol Siman, Karol Marhold and the member of the Presidium of SAS for Section 3 of sciences, Gabriel Bianchi, who evaluated the recommendations of the IAB, especially with regard to the creation of international advisory councils at individual SAS institutes. In evaluating the work of the institutes, they agreed that there was a significant increase in cooperation - also based on IAB recommendations - with universities. According to Karol Marhold, the Vice President of the SAS for the Section 2 of sciences, the signing of the Memorandum of Cooperation with Charles University in Prague deserves special attention. The IAB also appreciated the continued closer cooperation with the two largest Slovak universities, the Comenius University and the Slovak University of Technology, which was reflected, for example, in the SASPRO 2 program. Peter Samuely, the Vice President of the SAS for Science, Research and Innovations, informed about it within the meeting agenda, as well as about the upcoming IMPULZ program. Both programs are a good step to reducing the brain drain from Slovakia and contribute to the proclaimed brain circulation. Ľubica Lacinová, the member of the Presidium of SAS, informed about the number of actual doctoral students, emphasising that the SAS aims to attract more PhD students and post-doctoral students from developed countries. However, the current problem is the ongoing pandemic and the measures related to it that prevented many newly admitted PhD students from arriving in Slovakia.

In the next part of the meeting, M. Omastová informed the IAB members about the planned further evaluation of the SAS institutes, which will be for a period of six years from 2016 to 2021. The principles of evaluation were approved by the Assembly of Slovak Academy of Sciences in October 2019.

The IAB recommendation for further activities of the SAS will be sent by the IAB after discussion during November and will be published on the SAS website.

At the close of the meeting, the President of the SAS, Pavol Šajgalík, highly appreciated the help of the IAB in the transformation process of the Academy, according to him, the SAS moved forward very much thanks to the evaluation of the IAB. At the same time, he announced that another meeting of the IAB and the SAS will be scheduled for April or May 2021, during the election period of the current Presidium of SAS.