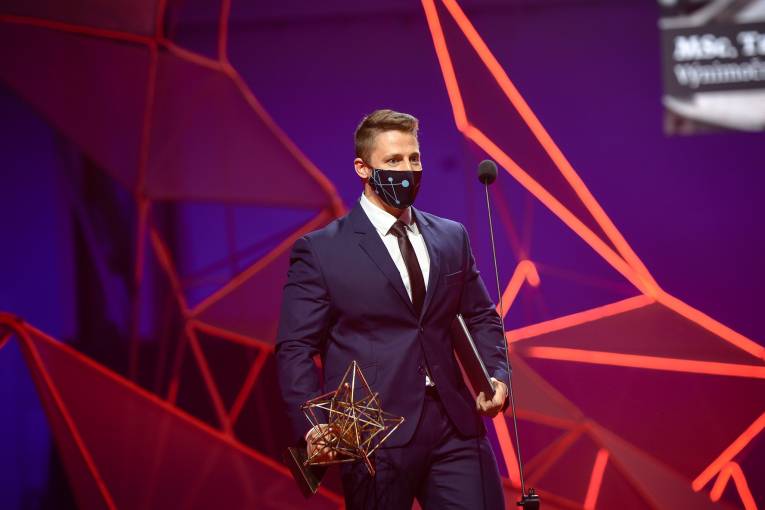 MSc. Tamás Csanádi, PhD. from the Institute of Materials Research of SAS in Košice became the winner of this year's ESET Science Award in the category of Outstanding Young Scientist under 35. "It's the most valuable award in my scientific career so far," he said after receiving the award.

Immediately after the awards, he travelled back to Leoben (Austria), where he ended his stay at the Montanunivesität Leoben within the "ERC-SAS Visiting Fellowship Grant". He said goodbye to the team of Prof. Raúl Bermejo (solver of the ERC project) from the Institute of Structural and Functional Ceramics after three months of cooperation and study and returned to Košice. After his return, we approached him for an interview.

What path led to this award?

It was quite a zig-zag path. I am a native of Budapest, where I studied pedagogy of mathematics and physics at Eötvös Loránd Tudományegyetem University (ELTE) and also continued my doctoral studies. I was led by Prof. Nguyen Q. Chinh (originally from Vietnam), who collaborated with Prof. Ján Dusz from the Institute of Materials Research of SAS in Košice. He was looking for someone to the newly formed team who had experience with nano-mechanical tests such as nanoindentation. He got a tip for me. When I came to Košice, I saw very well-equipped laboratories, a pleasant team and a beautiful city, as well as many opportunities for my scientific growth - it was decided. I changed my residence, started a new cycle of doctoral studies with Professor Dusz, and I also changed my scientific field - before that, I focused on metals, now ceramics. In 2017, I became an employee of the Institute of Materials Research of SAS in Košice, I work at the Department of Structural Ceramics of the Division of Ceramic and Non-Metallic Systems.

What fascinated you so much about ceramics that you literally signed on for it?

Materials engineering is very interesting, because it allows us to develop new materials, including ceramics, that make our lives more pleasant: functional, structural and bioceramic materials such as semiconductors, LED systems, roller bearings, ceramic brakes and valves, ceramic joints and teeth and so on. Advanced structural ceramics are much harder and more resistant to wear and heat than metals, so it could have an even wider use in industry. However, it is generally brittle and little reliable, which limits its wider application.

It is said that material researchers dream of bending ceramics...

Maybe we are no longer so far from fulfilling this dream. It is most likely that even brittle ceramics can deform. By the help of micro/nanomechanical testing, it was shown that nano-level ceramics are not as brittle as we thought. However, we need to figure out how to achieve this behaviour on a larger scale.  Then we will be able to start producing materials of the required size.

The subject of your interest and research is the development of ultra-high-temperature ceramics that can withstand extreme conditions above 2,000 degrees Celsius. How is this development proceeding?

I started developing ultra-high-temperature ceramics, which could be used as a thermal-protective shield for hypersonic aircraft, during my doctoral studies. My supervisor Ján Dusz and I cooperated with Professor Michael Reece of Queen Mary University in London, where they prepared a sample of zirconium diboride for me and I performed micro/nanomechanical testing to understand the deformation behaviour of this material. This cooperation continued and still continues, and led to the development of a new group of materials, the so-called high entropy carbides, which show significantly better properties than traditional carbides.We were the first ones in the world to publish scientific articles on the preparation and properties of these extra new materials in collaboration with colleagues from Slovakia and partners from London.

Your team is known for a number of research outputs, on which individual specialisations (physicist, chemist, metallurgist, engineer, etc.) are suitably supplemented. You have been drawn together both from human and scientific aspects, you are active in conferences, in obtaining grants. What is your idea of your scientific future?  Do you see it in connection with Košice?

Yes. I feel very good here, I have many opportunities to further develop scientifically. I have ideal opportunities to publish. In recent years, I have written more quality publications, which were published, for example, in leading journals such as Scripta Materialia, Acta Materialia, Carbon, Nature - Scientific Reports, etc., for which I have received numerous citations.

In many cases, it is a co-authorship, for which I thank my colleagues.  They also contributed to the fact that I travelled to the USA in 2017 for the "Acta Student Award 2017". In the same year, our team of young scientists (Tamás Csanádi, Dušan Németh, Marek Bľanda in memoriam, Annamária Naughton - Duszová and Alexandra Kovalčíková) received the SAS Award for significant contribution to the research of nanomechanical properties of ceramic materials. And this is how I could name our other successes. I am overly satisfied at the  Institute in Košice, I would like to have my team over time and lead doctoral students, just like Professor Dusza led me, for which I am grateful. Eventually, I would like to brush up on my pedagogical education and give lectures at university.  I connect the coming years with Košice, where my wife also came to see me and where we want to start a family.