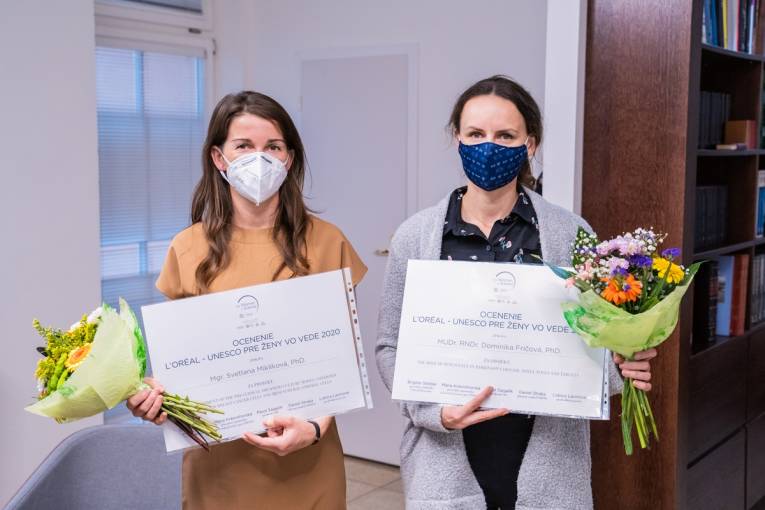 The fourth year of the L'Oréal-UNESCO For Women in Science competition had to do without an awards ceremony. The winning projects of the laureates, both from the Slovak Academy of Sciences this year, were announced online by the jury, both received the award on Monday, October 12, at the SAS from the President of the Academy, prof. RNDr. Pavol Šajgalík, DrSc.

This year´s awards were presented in the category of up to 35 years to Mgr.  Svetlana Miklíková, PhD., who works at the Cancer Research Institute of the Biomedical Research Center SAS in Bratislava, and to MUDr. RNDr. Dominika Fričová, PhD., from the Institute of Neuroimmunology SAS  in Bratislava.

Even though we have no shortage of top scientists at our institutes, their relative representation in management positions does not yet significantly reflect this situation, the President of the SAS addressed to the scientists when accepting the awards. At the same time, he motivated them to have ambitions to get into management positions, where we still feel a lack of women.

The member of the Presidium of SAS, prof. RNDr. Ľubica Lacinová, DrSc., who was the chairwoman of the jury of the  L'Oréal-UNESCO For Women in Science competition, briefly informed about the projects of both scientists, as well as about their scientific work to date. Both winners received a prize of EUR 5,000, which they can invest in further research or for personal purposes.

Mgr. Mgr. Svetlana Miklíková, PhD., works at the Cancer Research Institute of the Biomedical Research Center SAS in Bratislava. The subject of her research is a preclinical model of organoids, which consists not only of breast tumour cells but also mesenchymal stromal cells, which are an important part of the tumour microenvironment.

MUDr. RNDr. Dominika Fričová, PhD., works at the Institute of Neuroimmunology SAS in Bratislava and the goal of her research is Parkinson´s disease, where there is a selective death of dopaminergic neurons and is looking for a way to slow down the ageing process of these cells and help the patients.

The aim of the L'Oréal-UNESCO For Women in Science project is to highlight the work of Slovak scientists and draw the attention of the media to their talent and achievements, to address the young generation and motivate them for a scientific career.