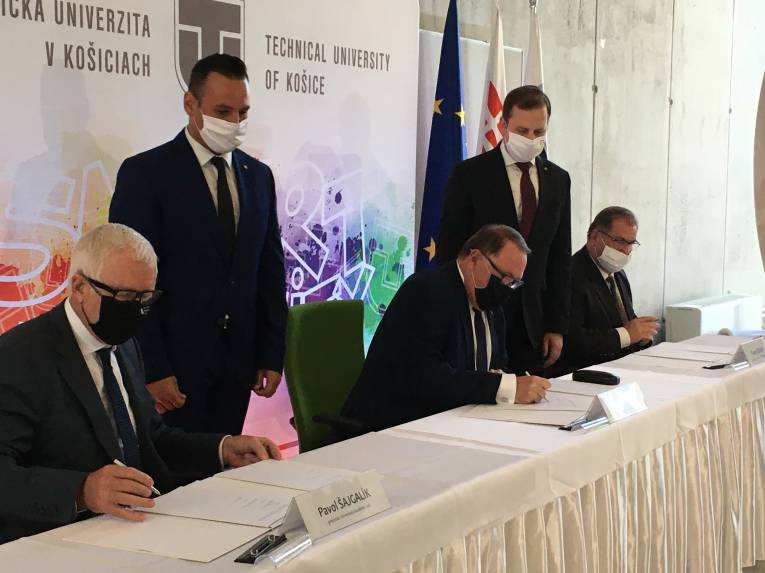 The Hydrogen Technology Research Centre to be established in Košice

The Slovak Academy of Sciences (SAS), Pavol Jozef Šafárik University (UPJŠ) and the Technical University of Košice (TUKE) will combine research and technological potential to effectively transform knowledge in the field of hydrogen technologies into new prototype solutions for various areas of life. On Friday, September 18, 2020, President of the SAS Pavol Šajgalík, the rector of TUKE Stanislav Kmeť and the rector of UPJŠ Pavol Sovák signed a Memorandum of Cooperation in the establishment of the Hydrogen Technology Research Centre in Košice.

The importance of cooperation between the Academy of Sciences and two Košice universities, which will strengthen the Slovak Republic´s ability to participate in global development in the field of hydrogen development and innovation, was supported by the Vice-President of the European Commission for Interinstitutional Relations and Foresight Maroš Šefčovič and the  Deputy Prime Minister for Economic Affairs and the Minister of Economy of the Slovak Republic Richard Sulík when participating in a ceremonial meeting in the premises of the TECHNICOM - the University Science Park.

The memorandum assumes that this area will gradually become one of the important elements of the acceleration of the Slovak economy. The Hydrogen Technology Research Centre (HTRC) will engage in research and development in the field of hydrogen technology throughout the cycle, using theoretical knowledge in the design and construction of functional prototypes of technologies and equipment. It will also create conditions for the application of knowledge in social and industrial practice, as well as training and education in the fields of hydrogen technology. “Europe has big plans for hydrogen and I am glad that Slovakia is keeping up. For instance, nine Slovak entities have signed up for the newly established European Clean Hydrogen Alliance. I believe that we will also be involved in the first call under the European Green Deal, which also opens the door to hydrogen projects. Hydrogen can be attractive to industries that are difficult to decarbonise, such as chemical or steel, as well as freight, rail and river transport. I wish the nascent Centre in Košice to make Slovakia a top player in the field of hydrogen,” said Maroš Šefčovič, Vice-President of the European Commission.

“I consider hydrogen to be the energy carrier of the future. If we grasp it together, it is also a great chance for Slovakia. Hydrogen technologies are at the beginning of their cycle, and their waste product is only water. This could bring Slovakia closer to the required goals of the European Commission until 2050 on carbon neutrality,” says Deputy Prime Minister and Minister of Economy Richard Sulík. For the HTRC, he identified as the first specific goal the Slovak presentation of research results in the field of hydrogen technologies at the world exhibition Expo Dubai, which will begin on October 1, 2021.

The framework for research, creation and development of solutions using hydrogen will be created by the National Hydrogen Strategy of the Slovak Republic and its action plan. “A comprehensive approach to this promising area is to cover activities from basic research to applications in the form of industrial technologies, products and solutions, as these will offer positive impacts on the economy and society,” said Juraj Sinay, the National Hydrogen Strategy coordinator.

The President of the SAS, Pavol Šajgalík, considers the project to be meaningful and welcomes the integration of the forces of universities and the Slovak Academy of Sciences. “I am convinced that the scientific community will find its application here,” he said in a speech before signing the memorandum.

The Institute of Materials Research of SAS in Košice also has a chance and interest, in which it has long been developing alloys for hydrogen storage, the so-called metal hydrides. “We are preparing completely new types of metal hydrides based on highly entropic alloys, which can store three times the amount of hydrogen compared to liquefied gas,” said Karel Saksl, Scientific Secretary of the IMR SAS. 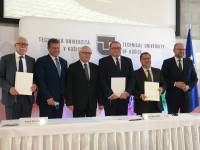 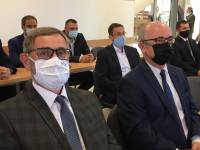