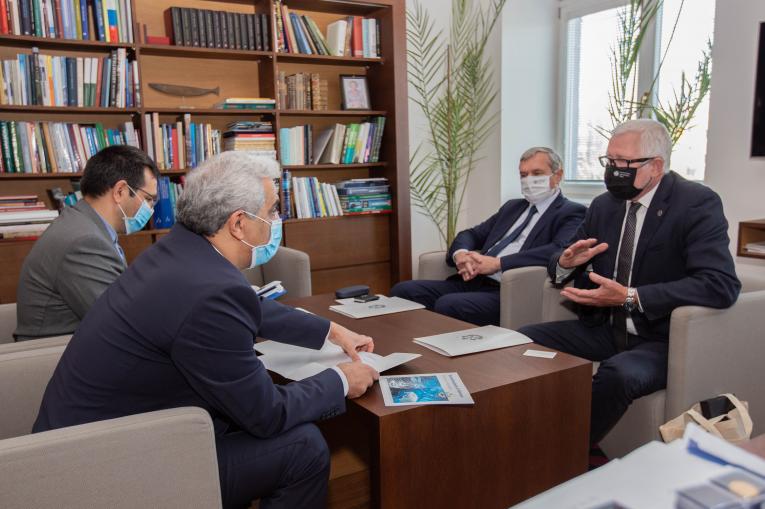 On Wednesday, September 9, the President of the SAS, Pavol Šajgalík, received at the Academy the Ambassador of the Islamic Republic of Iran, Abbas Bagherpour Ardekani, accompanied by Davoud Rezaei, Counselor for the Affairs of the Slovak Republic at the Embassy of the Islamic Republic of Iran (IRI). Dušan Gálik, Vice President of the SAS for International Relations, was also present. The topic of the meeting was scientific cooperation between Iran and the SAS.

In 2017, a memorandum of understanding was signed between the SAS and the IRI Academy of Sciences, which sets out the conditions for the implementation of individual or joint research projects, the exchange of scientific information or the organisation of joint symposia and conferences.

The President of SAS, Pavol Šajgalík, presented the structure of the SAS and its position in research in Slovakia. He gave special attention to the SASPRO 2 program, in which the SAS cooperates with the Comenius University and the Slovak University of Technology. The Vice President of the SAS, Dušan Gálik, briefly introduced the new SAS tool for the exchange of researchers and doctoral students, the Mobility program. As P. Šajgalík emphasized, both programs are also open to Iranian scientists and doctoral students.

The Ambassador of the Islamic Republic of Iran, Abbas Bagherpour Ardekani, mentioned the high standard of scientific and educational level in Iran and emphasized the interest of Iranian scientific institutions in cooperating with scientists in Slovakia. Both representatives agreed that good conditions have been created for the development of mutual cooperation in the field of exchange of researchers and doctoral students as well as in the field of joint research projects.