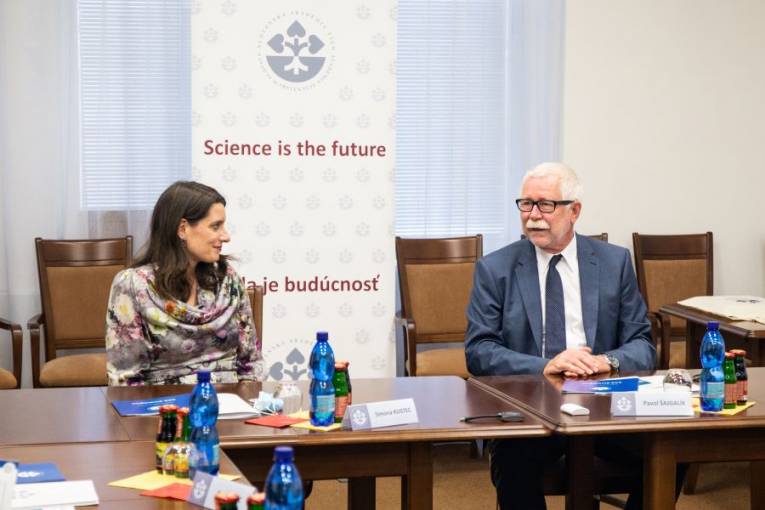 The Visit of the Slovenian Minister of Education in the SAS

On 22 July, the President of the SAS Pavol Šajgalík met with Simona Kustec, a Slovenian Minister of Education, Science and Sport, in the area of the SAS.  The Slovenian delegation included Dragica Bac, Director of the Minister's Office, Petra Mišič, Head of the PR Department, and Matej Kobav, Minister Counsellor from the Embassy of the Republic of Slovenia in the Slovak Republic. For the SAS, vice-presidents of the SAS Peter Samuely, Juraj Koppel and Karol Marhold, as well as Deputy Vice-President of the SAS for Foreign Relations Mária Omastová and Director of the Institute of Informatics of the SAS Ivana Budinská attended the friendly meeting.

The SAS has a developed cooperation with the partner Slovenian Academy of Sciences and Arts, which establishes the Memorandum of Understanding on Scientific Cooperation between the two institutions. At present, 58 joint projects are carried out in multilateral cooperation (in this context, e.g. COST 38, Horizon2020 - eight joint projects.)

"Slovakia and Slovenia are often mistaken, especially across the ocean.  I tend to explain that the difference is not only in the letter but also the number of resources that countries invest in research and development,” said the SAS President Pavol Šajgalík in the introduction. According to Eurostat, the investment in R&D (research and development) represents two per cent of GDP in Slovenia, in Slovakia, it is 0.79 per cent of GDP.

In the rankings of the most innovative countries in the world (Global Innovation Index – assesses 127 countries), Slovakia (34th) and Slovenia (32th) are almost side by side, but, for instance, in information technology, the gap is much more pronounced – while Slovenia is in the 29th place, our country in the 63rd. In the ranking, we are close together, for example, in patent activity, where Slovenia is 48th, Slovakia 50th.

Peter Samuely took the floor when he sketched of the history of the SAS and Slovak universities but mainly when he made a cross-section of the current SAS activity. In particular, he highlighted the closeness of the cooperation of the major Slovak universities and the SAS (V7). Among the priorities of the SAS, he ranked the WASSPRO2 program, which aims to attract young and prospective scientists to Slovakia. As P. Samuely pointed out in SASPRO2, the Academy will support 40 scientists.

The Director of the Institute of Informatics SAS, I. Budinská, spoke about the achievements of the Institute and she also mentioned, in particular, the projects related to artificial intelligence – the so-called talking head, transcripts of spoken word, etc. As the representatives of both institutions have agreed, the problem of artificial intelligence in connection with its application in science, but also ordinary life, will still require a lot of explanation.

In her short speech, the head of the Slovenian delegation, Minister Simona Kustec, thanked for the warm reception at the SAS and emphasized that although Slovenia and Slovakia are small in terms of population, both dispose of extensive human potential and unique natural wealth. It is an opportunity for researchers from both countries to take part in new joint projects and - like the SAS -thinks that the new European project challenges directly call for more intense participation of scientists in the area of social sciences and arts.

In the end, the representatives of both parties expressed their goodwill and willingness to take steps to establish closer and more extensive cooperation. It will be a benefit for small European countries such as Slovenia and Slovakia.