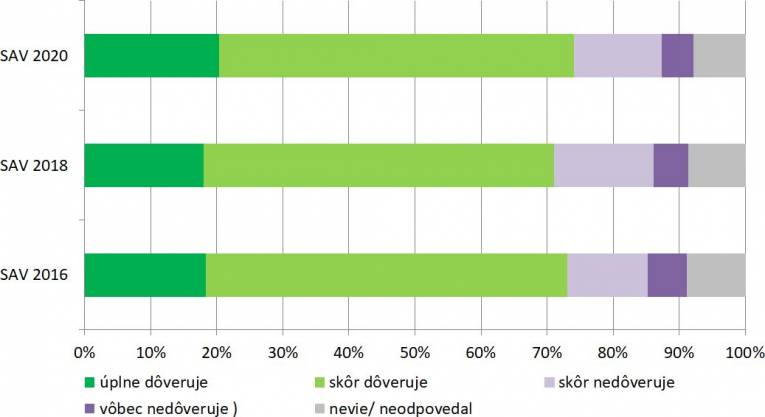 The SAS has the highest credibility with the population historically

Every fifth inhabitant of Slovakia completely trusts the SAS (20.4%).  A higher share of complete trust (28%) was expressed by the inhabitants of Slovakia only to the President of the Slovak Republic.

“I am very happy that the Academy of Sciences is, at the same time, the institution to which the lowest rate of the “complete distrust” was expressed - only 4.8%.  Similarly ended up the Slovak universities, which only 5.5% of respondents do not completely trust. We take it as a commitment to the inhabitants because the future of this country “stands and falls” on education, science and research. I say that the country which insufficiently invests into the science does not have a future, and the country which does not invest into the education does not have a presence,” said Pavol Šajgalík, President of the SAS.

The recognition of the SAS rises with the growth of respondents' education. The SAS is also a significantly recognized institution for the inhabitants of cities over 50,000. The credibility of the SAS does not have any statistically considerable connection to the respondents´ age nor their nationality.

“It is certainly heart-warming for the Academy of Sciences, and especially important for its future, that the above-average share of "completely trusting" is also among students (25.4%) and in this category is also the lowest share of those who "do not trust the SAS at all" (only 1.7%),” said Zuzana Kusá of the Institute for Sociology SAS.

The Armed Forces of the Slovak Republic, Slovak universities and the President of the Slovak Republic gained the highest level of confidence right after the SAS. The representative survey was realized by the Focus agency in days from May 14 until May 21, 2020 on a sample of 1011 respondents.