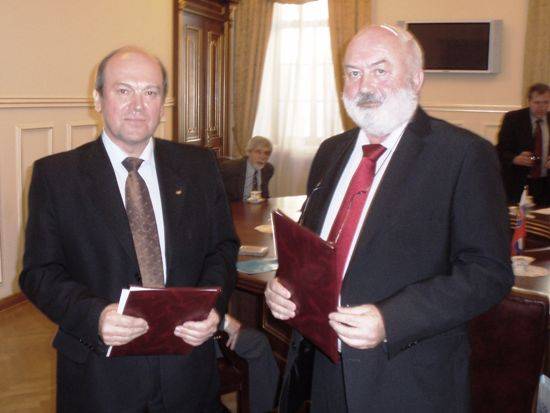 2. 5. 2008 | 3097 visits
On April 24th, 2008 in Kiev was signed the Protocol on Scientific cooperation between the National Academy of Sciences of Ukraine

(NASU) and the Slovak Academy of Sciences (SAS) within the period 2008-2010. The delegation of the Slovak Academy of Sciences was headed by Scientific Secretary, Dr. Ľubomír Falťan who signed the Protocol for the Slovak side. Mr Anatoliy Shpak, First Vice-President, Chief Scientific Secretary signed the Protocol for the Ukrainian side. On the meeting in Kiev participated for the Slovak side Mr Ján Barančík, Head of International Cooperation Department and then Mr Peter Kic, the representative of the Slovak Ambassy in Kiev as well. National Academy of Sciences of Ukraine was represented by the members of the Presidium and some representatives of the Foreign Relations Department of the NASU. The cooperation between the SAS and the NASU in 2008-2010 fulfills first of all within the framework of the mutual research projects which are coordinated by the interested scientific institutions of Slovak Republic and Ukraine. The number of the joint research projects is 17 and the project list is attached to the new Protocol. 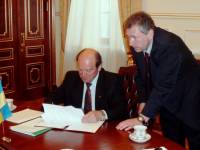