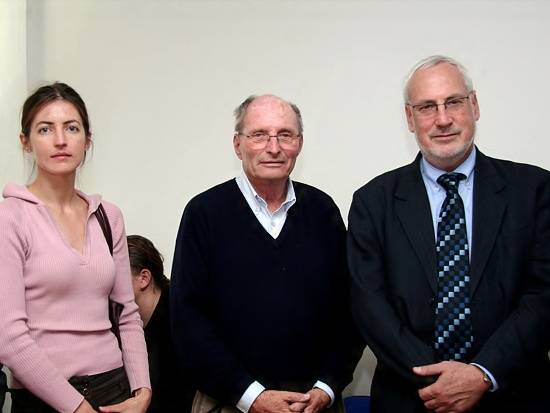 Radon joints the interests of researchers in geosciences

16. 4. 2008 | 3225 visits
Cooperation: Geophysical Institute of the Slovak Academy of Sciences and the Geological Survey of Israel...

Following a cooperation between the Geophysical Institute (GPI) of the Slovak Academy of Sciences (SAS) and the Geological Survey of Israel (IGS) in Jerusalem, continuing since 2000, the Geophysical Institute hosted on April 9–13, 2008 Gideon Steinitz and Oxana Piatibratova of the IGS. Dr. Steinitz is the former director of the IGS. Both researchers gave a scientific talk on Thursday April 10. Oxana Piatibratova spoke on Radon signals at the Gavnunim site, southern Makhtesh Ramon, Israel and Gideon Steinitz on Radon in the upper crust – a proxy of geophysical processes. Israeli ambassador to Slovakia J. E. Zeev Boker, accompanied by Igor Túnyi, the member of the Scientific Council of the SAS, took part at the oral presentations. The talks were followed by a rich and lively discussion. Later the Israeli guests had an informal meeting with the director of the GPI Ladislav Brimich. The Israeli ambassador was very much interested in the cooperation between the two institutions, its results and perspectives for the future.