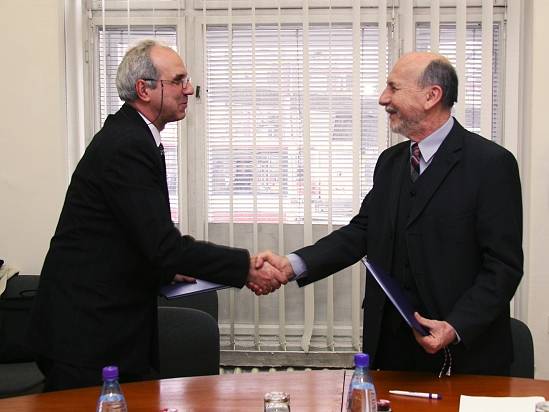 Signing of a Protocol with Bulgarian Academy of Sciences

(BAS) headed by prof. Stefan Hadjitodorov, Scientific Secretary of BAS, then Mrs Rumiana Radeva, Director of the Office of International Affairs and Mr Atanas Naydenov, Junior expert, same office. The main aim of their visit was signing of the Executive Programme of the Implementation of the Agreement between The Bulgarian Academy of Sciences and The Slovak Academy of Sciences for the period of 2008-2010 and discussing about other matters related to the scientific cooperation.

The Bulgarian delegation from the BAS was welcomed by prof. Fedor Ciampor, the Deputy of Scientific Secretary of SAS, Dr. Igor Túnyi, the Deputy of Vicepresident for the SAS Section I and Jan Barancik, the Head of SAS Department of International Cooperation and other SAS representatives.

At the beginning prof. Čiampor welcomed quests and informed them about current cooperation with the Bulgarian Academy of Sciences within the framework of the bilateral agreement signed in 1994. Then he briefly informed guests about bilateral and multilateral scientific cooperation of the SAS with its counterparts abroad. He mentioned as well that the cooperation with Bulgaria is based on governmental project cooperation.

The Bulgarian delegation visited the Institute of Informatics as well in the frame of their programme at the SAS where Ladislav Hluchý, the Director of the Institute welcomed them together with the other representatives of the Institute. Both sides changed their experiences with present cooperation and discussed about the possibilities how to intensify it in the closer period after the short presentation of the Institute. 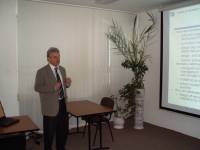