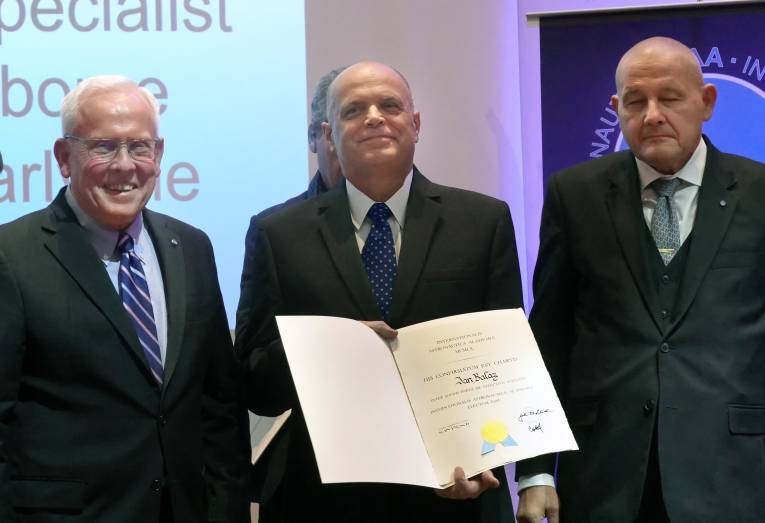 Space engineer Ján Baláž from the Institute of Experimental Physics SAS became a full member of the International Academy of Astronautics (IAA). The IAA brings together the world's leading experts in basic research, space engineering, space biomedicine and social sciences. Members of the IAA were well-known space pioneers Theodore von Kármán, Yuri Gagarin and Neil Armstrong. Currently, they include other world-famous figures in astronautics or space engineering, such as Buzz Aldrin or Elon Musk. This significant success also confirms the fact that Slovakia is among the world leaders in the field of space research.

The fundamental contributions to seventeen scientific missions of several space agencies helped Ján Baláž´s successful election as a member of the IAA. Among the most important are the ESA Rosetta mission, which executed the first ever landing on a comet, and the ESA BepiColombo mission, which is currently flying to Mercury and has already recorded its first scientific successes during close flybys of Venus and Mercury itself. Currently, the ESA JUICE mission to Jupiter's moons Europa, Ganymede and Kallisto is awaiting launch.

"I greatly appreciate being elected as a member of the IAA, it is one of the highest awards in the field of space science and astronautics," emphasizes Ján Baláž.

The full membership in the IAA is preceded by a candidate's appointment as a corresponding member. Ján Baláž received this status in 2019. "The standard prerequisite for election is nominations from three full members of the Academy from three different countries. Their international authority also plays an important role for the success of the election," explains the astronautics academician. Important proponents of Ján Baláž were academics Dr. Ladislav Macho (former SAS President) from Slovakia, Prof. Susan McKenna-Lawlor from Ireland and Prof. Stas Barabash from Sweden.

Ján Baláž became a member of the Engineering Sciences Section and the Space Technology Commission. "Together with colleagues from the Commission, we will participate in the preparation of working materials and recommendations in the field of space technologies," adds the scientist.

The induction ceremony of the new astronautics academics took place on September 17, 2022, at a gala dinner on the occasion of the International Astronautical Congress 2022 at the IAA headquarters in Paris. An academic day was held as part of the Congress, during which Slovakia was introduced to the world astronautics community as a future associate member of the European Space Agency ESA. The presentation of Slovakia to a number of invited foreign guests from the field of astronautics was provided by the Slovak Space Office at the Ministry of Education, Science, Research and Sport of the Slovak Republic in cooperation with the SARIO agency and the Slovak Embassy in France.

The International Academy of Astronautics was founded in Stockholm in 1960 by the prominent astronaut pioneer Theodore von Kármán. Its objectives are to ensure a high standard and recognition of the achievement of its members, to investigate and lead a discussion of current problems in space research and technology, and, in cooperation with national scientific and engineering institutions, to provide guidance in the peaceful uses and research of space. It currently has 1,200 members in 65 countries. A guiding principle of the IAA is broad internationalism, close cooperation with national academies in order to develop progress that transcends national borders, cultures and institutions.

ESA-BepiColombo spacecraft to fly around the planet Mercury
Read more >>

Comet NEOWISE to shine in the sky once again
Read more >>