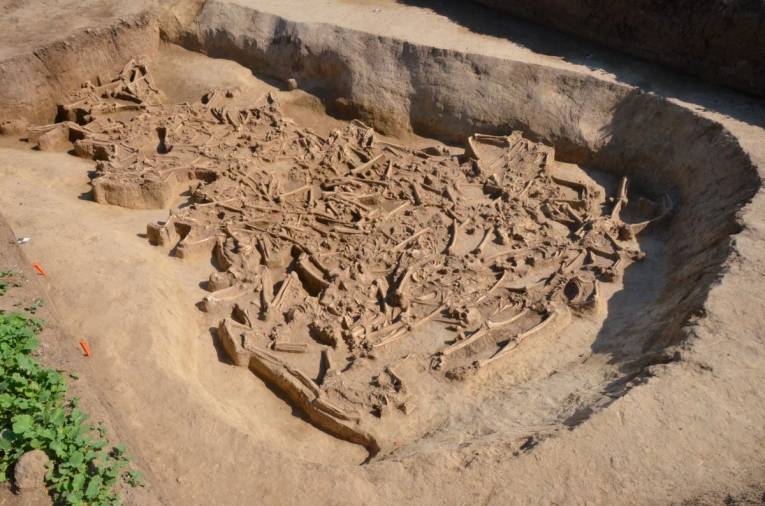 ARCHAEOLOGISTS UNEARTHED A UNIQUE DISCOVERY FROM THE STONE AGE IN VRÁBLE

A Slovak-German team of archaeologists has been investigating one of the largest Central European settlement agglomerations of peasants from the Early Stone Age in Vráble for the seventh season. The site dates from approximately 5250-4950 BC. It consists of three settlement areas with a total area of ​​approximately 50 ha. In one of them, researchers discovered more than thirty headless human skeletons in the past few days, whose last moments of life could have been extremely cruel.

Experts from the Institute of Archaeology SAS (AÚ SAV, v. v. i.) and Christian-Albrechts-Universität Kiel are participating in the research of the settlement areas in Vráble. Their cooperation so far has brought several interesting findings.

"In the final stage of operation, one of the areas was fortified with a moat with six entrances to the settlement that was doubled by a palisade, which was absolutely exceptional in Central Europe at that time. We also confirmed the presence of more than 300 longhouses through a detailed geophysical survey. It is possible that 50 to 70 houses could have been used at the same time during the individual stages of the settlement's functioning," explains Ivan Cheben, the head of archaeological research from the Institute of Archaeology SAS.

Already in previous seasons, archaeologists have discovered regular graves in the entrance area, but also human skeletons stored or thrown at the bottom of the ditch. However, the latest findings are extremely interesting for experts and open up a large number of new questions.

"In a ditch near one of the entrances, we discovered a cumulation of human bones, from which we managed to dissect at least 35 skeletons. The bodies originally lay in various positions – on their backs, stomachs, and sides, some in a frog-like position. A common feature is, as with the previously uncovered skeletons, that the buried individuals at the bottom of the ditch are missing their heads. We found only one child's skull and one part of a jaw-bone," explains anthropologist Zuzana Hukeľová from the Institute of Archaeology SAS, adding that several original fractures were already visible during the excavation.

According to the first findings, there are mainly juveniles among the dead. Accompanying findings occurred in minimal quantities. Interesting are, for example, the drilled human teeth, which could have been part of some kind of amulets.

The international team is now waiting for a whole set of other interdisciplinary tasks that will help to unravel in the laboratories whether they were, for example, killed individuals, victims of an epidemic, or the remains of cult ceremonies. Experts will also try to find out whether among the found skeletons there were also members with mutual genetic links and also whether the heads were forcibly separated or their separation occurred only after the decomposition of the body.

"Only then will we be able to decipher several questions about the social categorization of the inhabitants of that time, probably also about the emerging social inequality in the conditions of early agricultural societies, and perhaps even reconstruct the way of functioning or reveal the causes of the demise of this large agglomeration," adds Matej Ruttkay, the director of the Institute of Archaeology SAS.