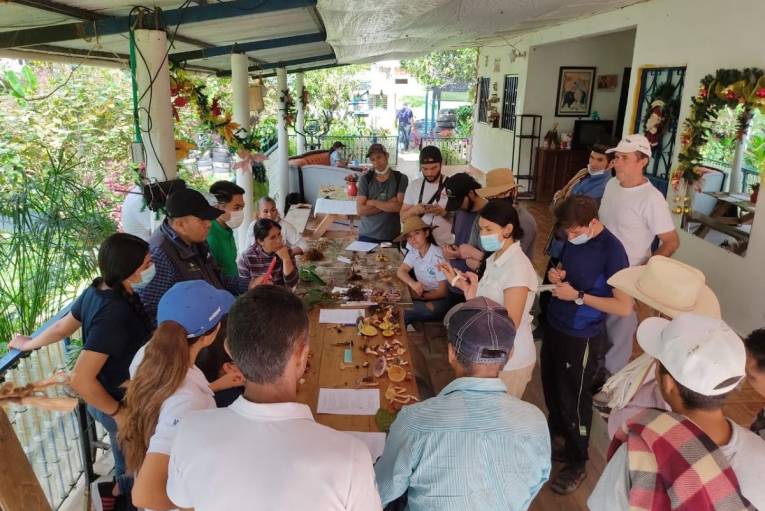 Black oak (Trigonobalanus excelsa) is one of the most important symbiotic ectomycorrhizal trees in Colombia. It is a slow-growing tree with limited reproduction, which is also endangered due to deforestation and selective logging. Black oak wood has a high density and resistance to rot, which makes it highly desirable for exterior use. Due to the complexity of the ecosystem dominated by black oak in Colombia, the restoration of areas affected by logging and agricultural activity is very difficult. Fungi growing in symbiosis with black oak in South America are also being researched by a team of scientists from the Slovak Academy of Sciences.

Biologists from the Plant Science and Biodiversity Center SAS (CBRB SAV, v. v. i.) have established a rich collaboration with scientists from the University of Rosario in Bogotá and are jointly studying ectomycorrhizal fungi in the tropical ecosystems of the Colombian Andes.

"We focus on the most species-rich genus Russula, because its diversity in tropical areas is still unknown to science due to a lack of studies. In cooperation with colleagues from Colombia, we, therefore, combined molecular, morphological, ecological and bio-geographic data and developed concepts for two new species - Russula floriformis and Russula ferruginea, which we described from the mountain forests of Colombia," explains Slavomír Adamčík from the Laboratory of Molecular Ecology and Mycology CBRB SAV, v.v.i.

The data developed by Slovak biologists were incorporated into wider research important for the protection of the Andes ecosystems. "Knowing the diversity and ecological role of symbiotic fungi is the key to understanding the possibility of black oak reintroduction," emphasizes the scientist, adding that research on the Russula genus is only at the beginning. "We expect there to be several dozen species of fungi from this genus in the Colombian Andes. Before our research, 6 species had already been described in the country, but they had not yet been phylogenetically defined. We will estimate the total diversity of the Russula genus in this area using a combination of DNA from soil samples and sporocarp," explains S. Adamčík.

Biologists also use fieldwork to popularize scientific results in local communities in the Colombian provinces of Huila and Santander. "We taught members of local communities and owners of nature reserves to recognize the most important types of fungi in the forest. We also trained them and included them in the collection of soil and biological material for DNA analyses of fungal diversity. The programme also included a lecture by Dr. Adriana Corrales from the University of Rosario on the threat to ecosystems dominated by the Trigonobalanus excelsa tree and the role of fungi in maintaining stability and restoration of habitats," added the biologist.

Part of the research was carried out within the project “In situ conservation of threatened trees of Colombia: Special focus on endemic and endangered species of Fagaceae - Priority taxa (2021-2023): Trigonobalanus excelsa (EN)” supported by the Franklinia Foundation for the protection of endangered tree species. The problematique of this project is related to the Slovak APVV-20-0257 project (acronym STRAKA).