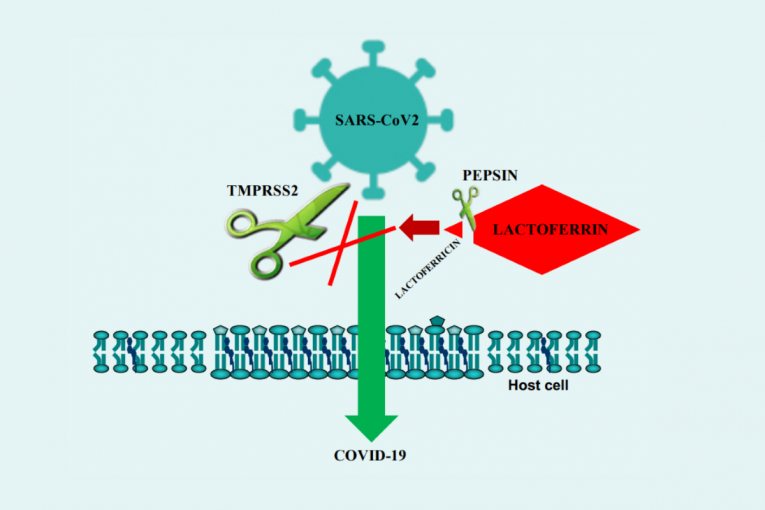 A team of scientists from the Institute of Molecular Biology SAS and the Medical University of Vienna led by Mgr. Vladimír Leksa, PhD., published the results of his latest study in the prestigious journal Frontiers in Immunology (impact factor 8,786). The research has confirmed that human milk glycoprotein - lactoferrin, its bioactive product lactoferricin, as well as the synthetic peptide derived from lactoferricin, block SARS-CoV-2 infection in cell cultures. The article was published under the title Blockade of TMPRSS2-mediated priming of SARS-CoV-2 by lactoferricin (doi: 10.3389/fimmu.2022.958581). According to this study, natural and synthetic peptides derived from lactoferrin might serve to support the prevention and treatment of COVID-19.

"After digestion, lactoferrin is broken down by pepsin in the stomach, resulting in the bioactive natural peptide lactoferricin. As an antimicrobial agent, it might be even more effective than lactoferrin," Vladimír Leksa explains the blocking mechanism. Lactoferrin is a glycoprotein with a lot of antimicrobial activity, which is mainly found in breast milk and is often used as a means to strengthen immunity.

"In the study, we proved that lactoferricin reduces the proteolytic (protein-splitting) activity of the human TMPRSS2 enzyme present in lung cells, where it inadvertently facilitates the entry of the coronavirus into the cells," describes the scientist. He also adds that when its activity is reduced with natural lactoferricin or synthetic peptides, cell infection is also blocked.

"Our results so far show that not only human lactoferrin, but also its bioactive digestion products can act as protection against COVID-19, which can have both therapeutic and preventive effects. Lactoferrin is present in high concentrations in milk and milk products as well as food supplements. Orally administered lactoferrin has a great clinical benefit in human, especially neonatal medicine, and is considered safe and without side effects," says V. Leksa, highlighting that lactoferrin is, therefore, a cheap and widely available candidate for additional treatment of COVID-19.

However, the scientist emphasizes that drinking milk as a prevention against the COVID-19 disease is not enough, although lactoferrin and its bioactive peptides are useful for health, not only in newborns. Cow, goat or sheep milk and cheese are common components of our diet in various forms. “However, lactoferrins derived from various mammalian species may show different anti-SARS-CoV-2 abilities. Depiction of their inhibitory capacities against the TMPRSS2 enzyme remains for future studies," explains V. Leksa.

"Lactoferrin is not a miracle drug and should only be considered as a supplement to vaccination and other antiviral therapeutic strategies," adds Vladimír Leksa from the Institute of Molecular Biology SAS and the Medical University of Vienna.