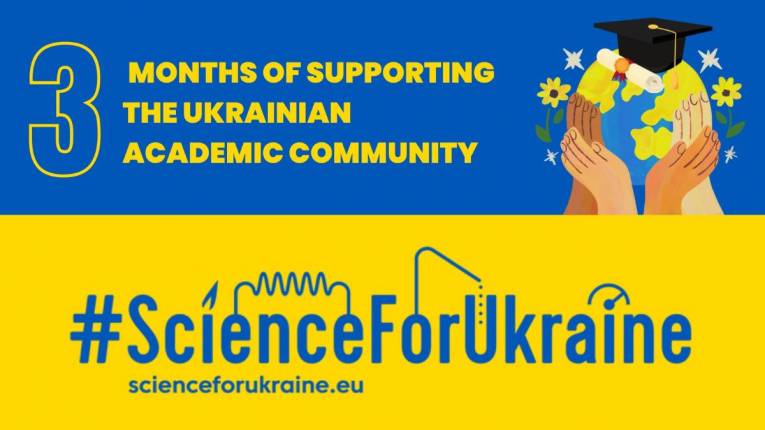 #ScienceForUkraine, the volunteer grass-roots initiative helping Ukrainian-affiliated students and academics, has published a report summarising the first three months of its operations. The report documents the formation and development of the initiative and provides information on #ScienceForUkraine activities from 26 February to 31 May 2022.

The website scienceforukraine.eu has become a well-known database for academic job listings and support offers. The #ScienceForUkraine volunteers in various countries support Ukrainian-affiliated scholars in applying for academic positions worldwide.

The 133 active volunteers at #ScienceForUkraine liaise with policy-makers and funding bodies to improve support for the Ukrainian academic community. At present, Science for Ukraine is best described as a bi-directional communication channel linkin the Ukrainian scholarly community and international institutions by providing information and advocacy.

The website scienceforukraine.eu became a central and well-known hub with a database of job listings and an extensive curated list of general support available in its member countries. There were more than 120k visits to the website in the past three months, 12k of which are reportedly from Ukraine.

#ScienceForUkraine has many active country groups that flexibly respond to needs in their geographic area. Collecting information, creating posters for border stations, mentoring, consulting on how to organise transfers, and engaging with policy makers are some of the tasks performed by volunteer members.

#ScienceForUkraine is active on all major social networks connecting with both international (primarily Twitter and LinkedIn) and Ukrainian academic communities (mainly Facebook and Telegram), with students reached mostly via Instagram.