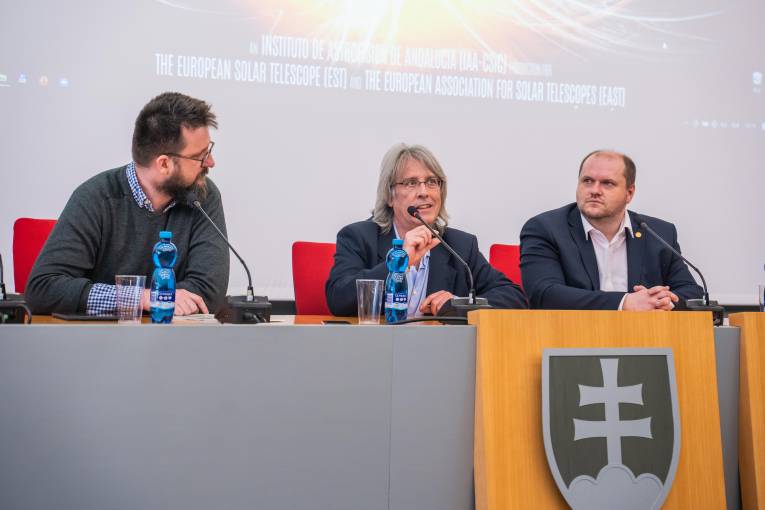 On Tuesday, May 10, 2022, the ceremonial premiere of the Reaching for the Sun – The Story of a Magnetic Star documentary about the history and present of solar research and the upcoming European Solar Telescope (European Solar Telescope - EST) took place. The film also features scientists from the Astronomical Institute SAS who explain the important role of the coronary station at Lomnický štít in the European solar observatories system. On this occasion, the prominent solar physicist Professor Manuel Collados from the Institute of Astrophysics of the Canary Islands and his colleague and executive producer of the film Luis Bellot Rubio from the Institute of Astrophysics of Andalusia in Granada visited Bratislava. A discussion on solar research was also a part of the premiere.

The Reaching for the Sun – The Story of a Magnetic Star documentary describes the history of solar research until current knowledge in an engaging way. The story of the last 400 years of Sun observations will culminate in the film in one of the biggest challenges facing the European community of solar physicists, which is the construction of the European Solar Telescope.

“The European Solar Telescope is a planned revolutionary instrument aimed at studying the basic processes on the Sun - our star, which dominates active phenomena and physical conditions in the heliosphere and thus directly affects the Earth's biosphere,” explained the director of the Astronomical Institute SAS, Peter Gömöry, who also added that it will be the largest solar telescope in Europe with a diameter of the main mirror of 4.2 m.

The filming also took place in Slovakia, on the grounds of the observatory of the Astronomical Institute SAS at Lomnický štít. In addition to solar physicists from the Slovak Academy of Sciences, scientists from Spain, France, Germany, Sweden and Italy also appear in the film.

In his introductory speech, the president of the SAS, prof. Pavol Šajgalík, emphasized that we are standing at the beginning of a new chapter in the European research of the Sun. “I am very glad that the Astronomical Institute SAS has been involved in this project. In addition to achieving very good results, the Institute also has a very long history of research in the field of solar physics,” he added and addressed the present students: “Science is a very exciting journey that I recommend to each one of you, and if you want to be a part of it, study physics, mathematics, technical and natural sciences, and I hope this film will convince you that it's worth it.”

23 scientific institutions from 16 European countries are currently involved in the EST project. These are the most important Sun research institutes, which, among other things, operate the key research infrastructure on the Canary Islands (GREGOR, SST, VTT, THEMIS telescopes) as well as the iconic Einstein Tower in Potsdam. The coronal station at Lomnický štít is an integral part of these facilities.

“It is the only functional workplace of its kind in Europe. As the EST telescope will not be optimized for solar corona observation, coronographs at Lomnický štít will always be considered an important part of comprehensive solar research in Europe,” added P. Gömöry.

After the screening of the film, the audience present had the opportunity to ask questions to the main coordinator of the EST project, Professor Manuel Collados, and the director of the Astronomical Institute SAS, Peter Gömöry. Video from the discussion moderated by Otakar Horák can be found together with the photo gallery at the end of this article.

According to the executive producer of the film, Dr. Luis Bellot Rubio, the Reaching for the Sun – The Story of a Magnetic Star documentary is to be used in the distribution of documentary television channels in the coming months. Negotiations with distribution companies are currently underway.