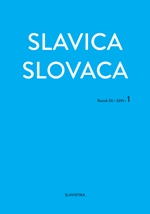 Slavica Slovaca is the only interdisciplinary slavistic journal in Slovakia, which has been editing by the Slovak Committee of Slavists in partnership with Jan Stanislav Institute of Slavistics. Slavica Slovaca publishes comparatively oriented scientific and technical studies, summary materials, reports of scientific events and reviews in the field of linguistics, history, ethnology, culturology, history of slavistics and musicology.
The content of the articles published in Slavica Slovaca is fundamentally determined by the research focus of the Jan Stanislav Institute of Slavistics that efforts to complexity of exploring approach, organizes and coordinates interdisciplinary researches in the relationships of Slovak language and culture with other Slavic languages and cultures, including researches on Slovak-Latin, Slovak-German and Slovak-Hungarian relations of the oldest and older period of comparative perspective in internal and external collaboration. Such studies help to make clear many aspects of Slovak linguistic-historical and cultural development in Slovak-Slavic and Slovak- Non-Slavic relations in an European context.
Due to the fact that Slavica Slovaca is a publishing authority of the Slovak Committee of Slavists and Jan Stanislav Institute od Slavistics, also publishes reports of the meetings of the Slovak Committee of Slavists, information about events in the International Committe of Slavists, about preparations of international Slavistic conventions, national Slavistic congresses and other current events of Slavistic research in Slovakia.
Slavica Slovaca is a platform for the exchange of knowledge in domestic and international Slavistic context.