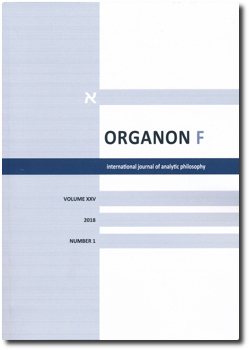 The Journal appears quarterly (in February, May, August and November).


Distribution
Dear Readers and Sympathizers of Organon F,
Due to our intention to make the journal accessible to the widest possible public, and thus increase the interest for analytic philosophy, we have decided to change both the form of publishing and our distribution politics.

Commencing with the volume 1/2013, Organon F will be published in both printed and electronic version, the latter being freely accessible at our website. The access to the articles will be unlimited, free of any charges and without any password to be needed. Moreover, the printed version will still be available in selected libraries.

Since the above changes, we have also decided to cancel all subscriptions, including both individual readers and institutions. However, it still holds that selected libraries and philosophical institutes will receive the printed version for free. Also, those individual readers interested in the printed version are highly invited to contact our office directly at organonf@gmail.com.

Note, that the above changes do affect both regular and supplementary issues.

We hope that the new shape of Organon F will sustain the existing favour of its readers, for which we are sincerely thankful.

1. General instructions
Organon F publishes original articles, discussion notes and reviews. Papers must be written in English, Slovak or Czech. Manuscripts should be submitted electronically as e-mail attachments, preferably in MS Word format. Articles must be supplemented with a short resume (of 100 to 250 words) and a list of key words in alphabetical order. A submitted paper will be usually sent to two referees. Therefore, manuscripts should be prepared for blind reviewing. Authors are asked to include their full name, academic affiliation and full address for correspondence, including e-mail address, in a detachable first page of their manuscript.

2. Notes
Notes should be inserted into the text using the “Footnote” function in Microsoft Word and numerated with Arabic numerals. Authors are asked not to use endnotes.

Authors should be aware that contributions are not paid. Regarding the fact that the editors (Institute of Philosophy, Slovak Academy of Sciences, and Institute of Philosophy, Academy of Sciences of the Czech Republic) enable the author to publish his or her articles in Organon F, the author forgoes any financial compensation, according to law No. 234/2000.