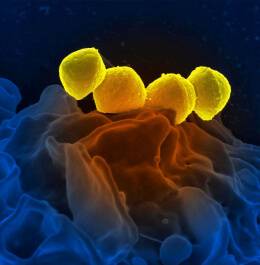 A major health problem today is the increasing occurrence of bacterial strains that are resistant to antibiotic action. There is a growing number of pathogenic bacteria that are resistant to several antibiotics and are called multi-resistant. It can be stated that modern medicine in this area is returning to the era before the discovery of penicillin.

Many pharmaceutical companies are intensively involved in the extensive development of new antibiotics, but it is very time-consuming and costly. New and new resistances are emerging for today´s common antibiotics, and pathogens are becoming resistant to them. In Europe, the most widespread are bacterial strains from the so-called ESKAPE group. These include the six most widespread multi-resistant bacterial strains: Enterococcus faecium, Staphylococcus aureus, Klebsiella pneumoniae, Acinetobacter baumannii, Pseudomonas aeruginosa, and Enterobacter spp. These strains are gradually replacing the originally sensitive ones, especially in the hospital environment. Intensive research is taking place around the world on how to replace antibiotics. One possible solution to this problem may be the phage therapy and the use of phages and/or their protein products in human and veterinary therapy. Bacteriophages are viruses that specifically infect and kill bacteria. The proper treatment of infections requires the identification of a specific target pathogen as well as an effective lytic bacteriophage.  Another alternative is the use of endolysins. Endolysins are protein products of bacteriophages that are formed during lysis of a bacterial host.  Endolysins can be used as alternative anti-infectives to eliminate bacterial infections.

At the Institute of Molecular Biology SAS, we have identified endolysin genes from several bacteriophages of gram-positive bacteria as part of scientific projects solution. We have isolated individual genes and overproduced the corresponding proteins in the bacterial strain of E. coli.  The isolated endolysins act outside the bacterial cell and are capable of degrading specific bacterial strains.

This year we managed to prepare a protein preparation of a new endolysin that is effective against the group B pathogen Streptococcus agalactiae. This bacterium is an opportunistic pathogen that is part of the gastrointestinal and urogenital tract in humans. The problem is its occurrence in the case of pregnant women. If left untreated, it can be transmitted during childbirth to the baby and causes serious illness in new-borns with serious to fatal consequences.