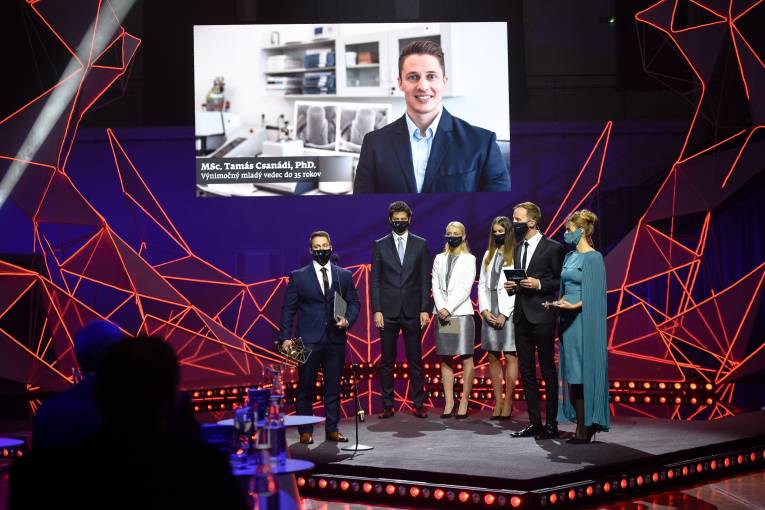 This year, too, the scientists from the Slovak Academy of Sciences received a significant award from the International Commission of the ESET Science Award, headed by Nobel Prize-winner Kip Thorne. Tamáš Csanádi from the Institute of Materials Research of the SAS won the award in the Outstanding Young Scientist under 35 category. Fedor Šimkovic was named laureate in the category Outstanding Personality of Slovak Science. Ivan Varga became the Outstanding University Teacher laureate.

The aim of the ESET Science Award is to highlight personalities of Slovak science whose contribution is significant not only for Slovakia, but also in the international scientific research arena.  The laureates of the scientific categories: Outstanding Personality of Slovak Science and Outstanding Young Scientist under 35 were selected by an international commission on the basis of demanding criteria, such as current scientific and research results and publications, measurable scientometric data, involvement in international scientific projects, communication and popularization, cooperation with other scientific disciplines, the principles of scientific ethics, the potential impact of scientific work on other areas of life, and the reference by close collaborators and students.

The International Commission was chaired by Nobel Prize-winning physicist Professor Kip Thorne, one of three awarded scientists involved in the first direct detection and observation of gravitational waves. Kip Thorne is one of the world's leading experts on the astrophysical implications of Einstein's theory of relativity. Currently, he is actively involved in the popularization of science, including writing books or collaborating on the creation of Christopher Nolan's popular film Interstellar, in which he was not only a consultant but also a co-author of the original film concept.

"Science and technology based on scientific research are key to solving problems such as pandemics or global warming – they can save the world,” Professor Thorne stated during his speech to the scientific community in Slovakia.  “I consider it equally important to encourage respect among both politicians and the public in science, and the scientists´ views. We also need a new generation of world leaders who will lead the world to responsible and science-based solutions.   The key benefit of the ESET Science Award is this inspiration, and its approach to highlighting the importance of science for society.”

The stream from the ceremony is available HERE.

“All the winners, but also the finalists of the award, are an example of how contemporary science in Slovakia should look. Their scientific work is connected to international research and looks at problems from the perspective of multiple scientific disciplines. Their research also corresponds to current problems faced by both Slovaks and the international community. I congratulate the winners and wish them further success in their scientific and pedagogical work,” summed up Richard Marko, CEO of ESET.

He works at the Department of Nuclear Physics and Biophysics, Faculty of Mathematics, Physics and Informatics of the Comenius University in Bratislava, where he leads a team consisting of young scientists and doctoral students. As part of his scientific work, he deals with neutrinos, which are among the most widespread elementary particles in the universe.  They develop in nuclear reactions in the Sun (in the stars), in the collisions of cosmic radiation with our atmosphere, in the decay of heavy nuclei inside the Earth, but also in our bodies.

Tamás Csanádi, laureate in the category Outstanding Young Scientist under 35

He works at the Institute of Materials Research of the Slovak Academy of Sciences in Košice, where he investigates the deformation behaviour of ceramics on a micro/nano scale in order to develop new advanced structural ceramics with improved plasticity.  As a result, the materials can have increased reliability, and could thus serve as an alternative to metals, but with a higher melting point and better hardness and strength.

He works at the Medical Faculty of Comenius University in Bratislava, and his research team was one of the first in the world to describe the wide lymphatic spaces in the fallopian tube wall and the occurrence of specialized immune system cells suppressing defence reactions in the fallopian tube lining.  The team now builds on this basic research and explores how the new knowledge could be used in the treatment of female infertility.  They also managed to confirm the connection between some congenital heart defects and altered microscopic structures of thymus in children.