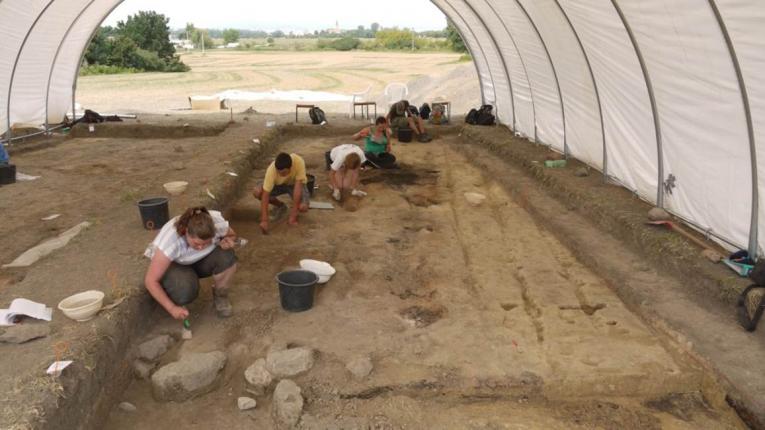 The unique archaeological site of Vráble-Fidvár compared with Mycenae

Archaeological finds lure.  We like to read about them, watch films, travel to Greece, Italy...but we have not only one under our noses. And since man likes to compare, the Vráble site, in the locality of Fidvár, was compared to the Greek Mycenae by someone, and it´s been “carrying this stamp” ever since. But it's not quite like that. Fidvár is Fidvár.

“It is tempting to compare the Vráble Fidvár with Mycenae, but it is quite inaccurate. Although in both cases they are fortified settlements, they differ fundamentally from each other by the time of their existence, location, layout, set-up, internal build-up area, the nature of the fortification, the material used in the construction, etc. The fortified settlement in Vráble is chronologically older, it was founded around the year 2000 BC. Mycanae are a few centuries younger (the Mycenaean period begins around 1600 BC),” explains rather sharply Prof PhDr. Jozef Bátora, DrSc., from the Institute of Archaeology SAS.

However, the calculation of the differences does not end with the date of origin. Prof. Bátora considers as remarkable the fact that the settlement in Fidvár was founded by bearers of two cultures: the Hatvan culture with the centre of settlement in north-eastern Hungary and south of central Slovakia, and the Únĕtice culture, which was widespread from eastern Germany to western Poland through Bohemia, Moravia, Lower Austria to as much as south-western Slovakia. “So in the area of today's Vráble we have a remarkable proof of the conflict-free clash of two different cultures,” he points out an important experience.

“Unlike Mycenae, there was a regular build-up area in Vráble with several rows of houses arranged radially along the fortification. The houses were separated from each other by alleys and streets. The identified method of build-up area has the obvious features of a proto-urban character,” explains the archaeologist.

In both cases, these were also the places where the highest social class resided - in Mycenae, it was the princely seat and in Vráble, the seat of the social elite. Both sites also have in common the fact that their premises were entered through two entrances, and during the research of both, burial grounds were also discovered. So does Fidvár have anything "extra" compared to the far more famous Mycenae? "The fact that it lies not in the Eastern Mediterranean as Mycenae, but in Central Europe, and thus represents the oldest documented “city” in this area," explains J. Bátora.

According to available information, the site has been known since the end of the 19th century, but the breakthrough came with the research in 2007 to 2017, during which Slovak archaeologists collaborated with the German Archaeological Institute based in Frankfurt am Main. "We knew about the great potential of the site in Vráble-Fidvár, to get to know the Early Bronze Age in the Middle Danube area, because 40 years before us, in 1967, Anton Točík, the former director of the Institute of Archaeology SAS in Nitra, carried out the so-called detecting survey there,” explains J. Bátora, who was the professional guarantor of this research from the beginning. The survey indicated that it was a fortified multi-layered settlement - tell, with significant evidence of settlement over the entire duration of older Bronze Age. “When colleagues from Germany were looking for a suitable location for systematic research of a fortified settlement in south-western Slovakia in 2006, I turned their attention to Fidvár. Subsequent extensive geophysical research, combined with surface field prospecting, carried out in the spring of 2007, showed that a settlement of exceptional importance is located in Fidvár,” he describes.

The survey confirmed that under the current surface, in addition to three circular fortification ditches, there are also about 180 extremely well-preserved floor plans of houses. And moreover, about 300 meters south of the settlement, scientists identified a burial ground where they buried its inhabitants. After these important findings, an extensive international systematic research was opened up in 2008, led by and professionally covered under the auspices of Jozef Bátora for the Slovak side and Dr Knut Rassmann for the German side.

“Thanks to the involvement of several disciplines, especially natural sciences (dendrochronology, palaeobotany, palaeozoolology, palaeogeography, geology, pedology, anthropology, palaeopathology and palaeogenetics), we have been able to gain a lot of new knowledge about human life, society and economy in the Early Bronze Age,” he says and adds that, given that Fidvár was extremely fertile land, it was possible to grow mainly double-grain wheat, from which porridge, girdle cakes and bread were prepared. Seeds of plants that are no longer consumed, such as lambs quarters, were also used to prepare meals. In the background of the settlement, livestock was kept, mainly beef cattle, sheep/goats and domestic pigs. Additionally to growing crops and breeding domestic animals, hunting, fishing and picking still played an important role. Prospecting, i.e., the search for and extraction of minerals, played a significant role in the economy. The target was mainly deposits of non-ferrous metals (copper, gold, tin), which were located mainly in the mountainous areas of central Slovakia. Thus, the main part of the economy was metallurgy, i.e., melting, casting and production of various objects and ornaments from copper, bronze and gold. The significant economic activity was also the production of objects and ornaments from bone and antlers, as well as the production of ceramics.

“It may sound paradoxical, but a lot of information about human life in the studied period was also provided by the research of graves in the burial ground. Research in Vráble brought a certain "added value" by us being able to identify a large settlement of the first farmers, about 7000 years ago, part of which was fenced. We also found here two Roman military marching camps from the second half of the 2nd century AD, which are among the first discovered in Požitaví,” J. Bátora summarizes the results of the research.

The Vráble-Fidvár site was declared a national cultural monument (NCM). “I think that we do not have many national cultural monuments of this type in Slovakia - it means that it is protected, no agricultural activity or other work that would disrupt it may be carried out on its territory. Such an archaeological site is also more legally protected against theft by detectorists, who, if caught while performing such unfair activities in the NCM area, face up to 10 years in prison,”  the archaeologist explains the importance of NCM.

This does not mean, though, that scientists do not want it to be in the public eye. The Institute of Archaeology SAS and the town of Vráble have an interest and ambition to build an open-air museum on Fidvár together, which should consist of faithful replicas of several houses or other farm buildings. “Besides the open-air museum, we would also like to build the Museum of Man of the Early Bronze Age there. It should be a stand of science and culture, which will collect the findings from the Early Bronze Age, from research carried out by the Institute of Archaeology in Nitra, throughout Slovakia,” states the archaeologist. “Our idea is a complex that will be open all year round,” contemplates Prof Jozef Bátora. He sees an example in Polish site of Trzcinica, where there is also a museum and open-air museum called Carpathian Troy.