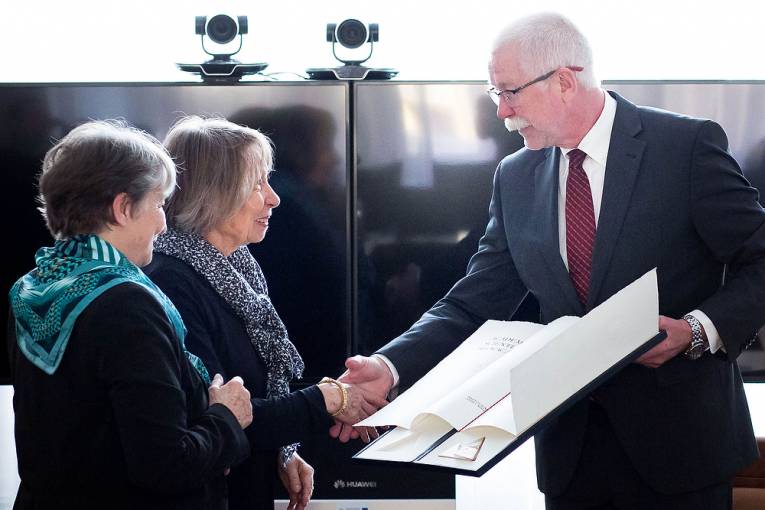 SAS medal to Association of Jan Hus in Paris

4. 4. 2016 | 1318 visits
On Monday, April 4 the Award for supporting science of SAS handover ceremony to the Association of Jan Hus in Paris was held at the Presidium of the Slovak Academy of Sciences in Bratislava
President of the Academy of Sciences prof. Pavol Šajgalík awarded Nathalie Roussarie and Marie-Christine Lagrange. The reasoning of the award states that the Association Jan Hus continuously contributed to increasing of the scientific credit of SAS and supported development of science policy of SAS. At the same time it brought in support of science and culture in Slovakia.
"The activity of your organization is extremely important for the former Czechoslovakia and present Slovakia, because we need an intellectual committed people who work for the society. For our part, we appreciate that very much," said the President of the Academy prof. Pavol Šajgalík during the ceremony.
During the speech at the ceremony Nathalie Roussarie emphasized that the French side is receiving the medal with great joy. "Participation on the life of the association means connecting of all abilities and competencies to achieve a common goal. It means to build something and we are truly happy from our collective achievements."

Association of Jan Hus was founded in 1981 as an association of French teachers and researchers with a goal to help the Czechoslovak intellectuals. From its foundation until 1989 it organized secret seminars in the former Czechoslovakia and provided the supply of scientific literature. After 1989, the cooperation between French intellectuals and the Czech and Slovak Republic transformed. It focused primarily on the Summer Universities of French Philosophy (from the 2011 French Summer University). They are held alternately in the Czech Republic, Slovakia and France and since 2010, they are organized in close cooperation with the Institute of Philosophy of SAS, which has become one of guarantors of the events.

The Summer University has become a top scientific event and intense revive for Francophone philosophical life in Slovakia. Through participation in these events several students could complete doctoral studies abroad, whereby the French professors took on the role of advisers.