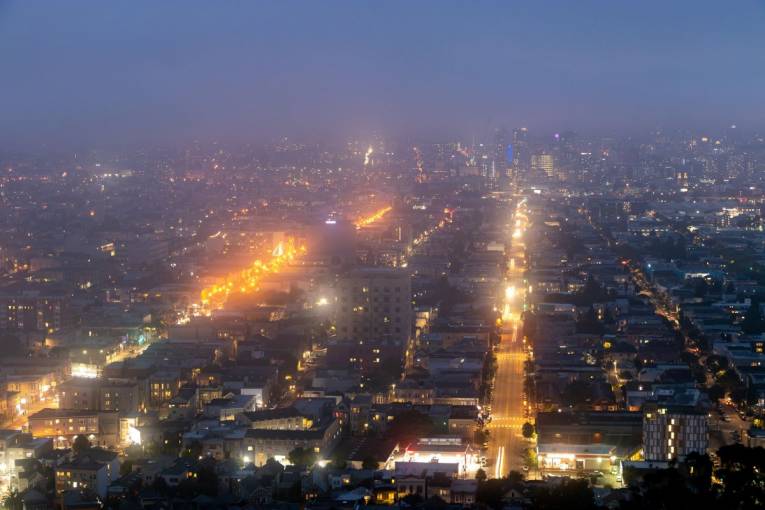 The night sky is darker without aerosols in the atmosphere

Light pollution is a growing environmental problem with unfavourable prospects for the future. As a result of the illumination of the night environment, the brightness of the sky is already increasing even in regions that, until recently, were not threatened by light pollution. Municipalities around the world are investing heavily in modernising or regulating public street lighting sources in an effort to reduce light smog. In their latest study, a pair of Slovak and American scientists note that other measures also help to reduce the brightness of the night sky and point to aerosol particles. Their elimination in the atmosphere can darken the night sky by up to 60% with an unchanged performance of urban public street lighting sources. The study was published in the prestigious scientific journal Nature Scientific Report.

The authors of the study are Miroslav Kocifaj from the Institute of Construction and Architecture SAS and the Faculty of Mathematics, Physics and Informatics of Comenius University and the American scientist John C. Barrentine from the University of Utah. The researchers base their results on a computer model, which they tested in the spring of 2019 at the observatory in Vienna. During the experiment, the atmospheric conditions changed to such an extent that there was a temporary but significant purification of the air. The brightness of the night sky over the city decreased by tens of per cent due to the decrease in the number of aerosols in the atmosphere, even at relatively short distances from light sources.

“Aerosol particles produced by industry or transport, which are commonly found in large quantities in urban atmospheres, increase the level of diffuse sky light several times. The larger the dust and aerosol particles, the more light they scatter,” explains Miroslav Kocifaj, adding: “Large particles have a significantly shorter residence time in the atmosphere and fall rapidly to the earth's surface in a short time. There are thus incomparably more small particles in the atmosphere, and despite the insignificant contribution of every single small particle to light pollution, they can all together cause a sufficient increase in the level of light smog.“

The brightness of the sky can also change with the chemical composition of the particles. Carbon-containing particles, which are formed, for example, by the combustion of fossil fuels or industrial activities, absorb light very well. On the other hand, mineral salt particles can increase the brightness of the night sky due to more efficient scattering and less absorption.

In this context, scientists are offering help to urban agglomerations. “In principle, we can specifically identify the most risky sources of pollution for each city and thus define the measures that need to be taken in that region. However, we can already say with certainty that suitable measures are better control and regulation of emissions of specific types of aerosol particles or installation of electric traps or other technologies in the most risky operations,” emphasises the scientist.

"Our research proves that if the obtained results were taken more seriously by larger cities or city districts (for example in Bratislava), they could achieve a significant improvement in conditions, even without incurring large financial costs for the reconstruction of public street lighting," concludes Miroslav Kocifaj.https://www.nature.com/articles/s41598-021-94241-1#Sec3