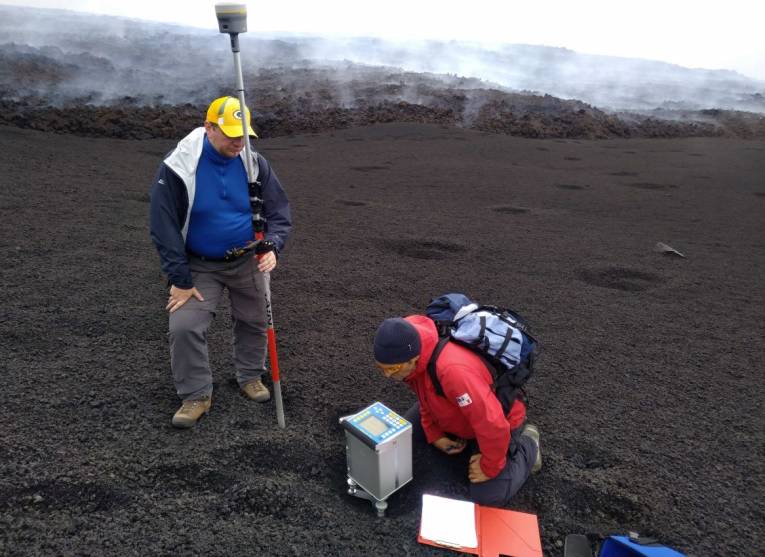 Slovak scientists Pavol Zahorec from the Department of Gravimetry and Geodynamics of the Earth Science Institute SAS and Juraj Papčo from the Department of Theoretical Geodesy and Geoinformatics STU in Bratislava are currently on the Etna volcano in Sicily, where they perform gravimetric measurements in collaboration with colleagues from INGV Catania, Osservatorio Etneo. Field work is part of the Earth Science Institute SAS project with the acronym G-ET-SUMMIT (project leader Peter Vajda), which is funded by the EU through the larger international project EUROVOLC within the H2020 scheme.

The aim of the project is to measure gravity data in the top part of Etna, prepare a new map of Bouguer anomalies for this area and then model this data and get a 3D image of the construction of top craters and the structure of the shallow part of the magmatic system of Etna.

The conditions are extremely demanding, because after a short break, Etna does not stop spewing lava fountains.

Etna has been extremely active since the autumn of last year. “It produces lava fountains and paroxysms several hundred meters high, which have already reached a kilometre in height. It emits a lot of ash and volcanic gases into the air together with lava,” Peter Vajda from the Earth Science Institute SAS describes the conditions of the scientists.  The peaks of Etna around the craters are, therefore, covered with unstable volcanic products, and in several places, fresh lava flows down the slopes hundreds of meters.

“These are exactly the places where it was necessary to perform measurements. Etna seems to be preventing geoscientists from looking into her insides by measuring gravity and gravimetric modelling,” says Peter Vajda, adding, “at places where Pavol and Juraj measured on Monday, fresh lava flowed from the eruption on Tuesday, which occurred on Tuesday morning”.

Scientists cannot estimate how many of the planned measurements can be made, because the steep slopes around the craters are very unstable due to the freshly spilt volcanic products that cover them. “This causes avalanches, landslides, boulders falling, and thus makes it impossible to measure the exact position of the measured point using GNSS (GPS) due to unavailability and also using a gravimeter at pre-planned places," explains P. Vajda.

The measurement campaign runs from July 19 to July 23.