What will the night sky show in the coming days

In the first quarter of 2021, we expect the periodic comet 141P/Machholz 2 in the sky, which will be observable even with small telescopes. We could see it in the sky already in December 2020.

”It is a periodic comet of the Jupiter family with an orbital period of 5.33 years. It was discovered in 1994 during a sudden brightening caused by disintegration.  It is brighter than the 12th Magnitude and will be visible from the beginning of the year until the end of January when it will be observable for four hours in the evening after sunset. It will be visible low above the southern horizon in the constellations of Aquarius and the Cetus,” said doc. Ján Svoreň from the Astronomical Institute SAS.

The planet Mercury, which is closest to the Sun, will also be in a favourable position for observation. According to the SAS astronomer, this planet is brighter than all the stars in the sky except for Sirius, but few have seen it with their own eyes.

“Not even the famous Nicolaus Copernicus succeeded in this. In its orbit around the Sun inside the Earth´s orbit, Mercury has never moved more than 28 angular degrees from the Sun. Even in this configuration, which we call the greatest elongation, it is located low above the horizon in the Sun-lit twilight,” said Ján Svoreň.

The best conditions for the observation of Mercury are at the equator. “As you move away from the equator, the ecliptic (near which Mercury moves) forms an ever smaller angle with the horizon, and the conditions for observation deteriorate. In the territory of Slovakia with a geographical latitude of 48 to 49 degrees, the conditions are at a limiting point, but under good weather conditions, Mercury is observable,” said the astronomer.

The best conditions for observing this planet will occur on January 24, 2021, and will last for several days around this date. ”In the evening twilight, it will set 1.5 hours after the sunset. A similar good position for its observation will be repeated around March 6, when it will be visible in the morning before sunrise,” specified the astronomer. 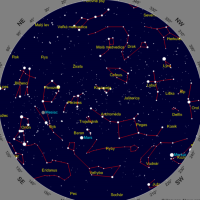