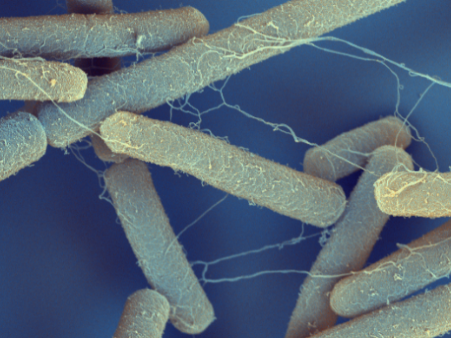 In collaboration with Czech and Slovak scientists, a new study was made and published in the prestigious journal Nature Communications, which proves that the story of bacterial nanotubes is taking a whole new turn - scientists were able to describe a unique phenomenon that occurs when a bacterial cell dies.

In this study, the scientists from the Institute of Microbiology of the Academy of Sciences of the Czech Republic led by Libor Krásný, and the Imrich Barák's Lab of the Institute of Molecular Biology SAS revealed that these nanotubes are, in principle, formed from every cell when they used different stress factors such as pressure or exposed them to antibiotics.

“The description of the bacterial nanotubes themselves is one of the most interesting phenomena in the microbiology of the last decade,” explains RNDr.  Imrich Barák, DrSc. from the Institute of Molecular Biology SAS. These formations are characterised as lipid tubes emanating from bacterial cells into space, with a length sometimes 50 times greater (more than 100 nm) than the length of the bacterial cell itself (approximately 2-4 nm). The nanotubes are approximately 70 nm in diameter. “With these long and narrow tubes, the bacterial cell examines its surroundings, at the same time it can use them to connect with another cell, either of the same species, or with a completely different one, and even use them to connect with a eukaryotic cell,”explains I. Barák.

Thanks to nanotubes, phenomena such as the transfer of DNA, RNA and proteins between cells of various bacteria, as well as “vampire” nutrient uptake from a eukaryotic cell, have also been described.

The transfer of DNA through these nanotubes can be another way of spreading antibiotic resistances among different species of bacteria.  The results of these researches have been published in the best scientific journals such as Cell, Nature Communications and others.

“The problem with examining nanotubes in living cells was that these formations occur in small numbers,” the scientist describes the research, adding details: “Bacteria are bounded by a cell wall, which maintains a pressure of up to twenty atmospheres inside the cell.  However, if the wall is disrupted, mechanically or by the action of antibiotics, further maintenance of such a high pressure is not possible. This pressure then literally causes the ´shooting up´ of a cytoplasmic in the form of a nanotube into the external environment through the openings created in the cell wall. Our videos from the published article show unique images from the fluorescence microscope, where you can clearly see the shooting tubes from Bacillus subtilis cells and where you can also see that the cell dies within a few seconds. Cell death is visible when a colour, specific for observing the cell death, penetrates the cell within a few seconds.”

“The results from the study prove that the bacterium most likely does not use nanotubes for the exchange of various biological substances, but is only a ´post mortem´ manifestation of a stressed and dying cell,” says I. Barák.

Nanotubes have been studied by scientists in a whole spectrum of different bacteria and that is why these findings are of wide relevance to the entire field of microbiology and can also be used to combat bacterial resistance to antibiotics.“ Last but not least, the formation of nanotubes during cell death is a discovery that significantly shifts our knowledge of bacterial physiology and communication,” concludes Imrich Barák.