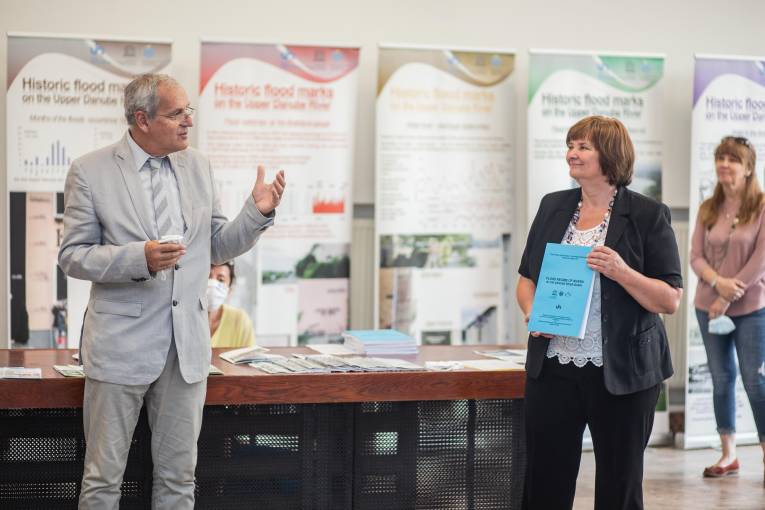 Flood regime of rivers in the Danube River basin

Already at the end of 2019, the monograph called Flood regime of rivers in the Danube River basin (Režim povodní v povodí rieky Dunaj) was published at the Institute of Hydrology SAS as part of the Regional cooperation of the Danube countries (within the UNESCO International Hydrological Program). Hydrologists from 11 countries of the Danube basin cooperated in its preparation and on Monday, June 29, the authors christened it on the occasion of Danube Day in the Hall of the SAS at the Patrónka in Bratislava.  The christening also included the ceremonial opening of the exhibition Flood Marks in Slovakia.

"In the monograph, we created a unified database of series of average daily flows and series of maximum annual flows from more than 80 stations in the Danube basin," RNDr. Pavla Pekárová, DrSc., co-author of the monograph explains one of the main benefits of the publication. The collected and used data from the entire Danube basin had a uniform processing methodology.

The monograph has 215 pages of text and 527 pages of appendices on the enclosed CD. It has nine chapters, 29 authors from 11 Danube states took participated in their elaboration.

In the individual chapters, you will find an analysis of the measured series of data from the database of average daily flows and maximum annual flows, the history of floods and the spread of floods along the Danube course. "20 stations with a number of quality observations were selected on the Danube course. On the Danube tributaries, experts from individual countries chose 65 stations, in preference from profiles that are not disturbed by human activity and have the longest possible series of uninterrupted observations (since 1931 and earlier),” explains P. Pekárová.

The book includes analyses of homogeneity of annual time series of flows, cyclicality and long-term trends of series of average annual flows and maximum annual flows or monthly flow regime and its changes in the Danube basin.

As the expert explains, one of the methods was to gather information about historic flood marks along the Danube from Germany to Hungary. "From this point of view, there are big differences between the upper Danube, the middle (central) and the lower Danube. There have been a whole number of flood marks on the upper course of the Danube in Germany and Austria since 1501. The height of the historical flood marks is proof that from 1501 to 1900 there were at least three bigger floods on the upper Danube than in the last 100 years.”

Another of the chapters is a statistical analysis of the maximum annual flows, the meeting of flood waves on the Danube and its main tributaries.

In the book, you will also find the design flood waves on the Danube along the length of the course and on its tributaries.

In the last chapter, the authors evaluate the regionalisation of the outflow regime based on flood flows and other hydrological characteristics of the outflow using a copula of functions.

The text of the monograph and appendices is available at http://www.ih.sav.sk/danubeflood.