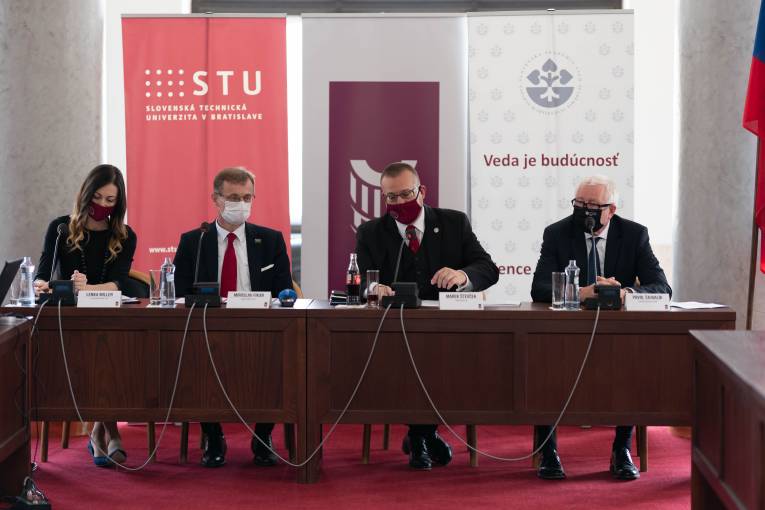 Today, the three most important Slovak scientific institutions assessed the cooperation, which began a year ago with the signing of a memorandum on cooperation in the field of education, science and development. The Comenius University in Bratislava (CU), the Slovak University of Technology in Bratislava (SUT) and the Slovak Academy of Sciences (SAS) are the most important scientific institutions in Slovakia and, with their research potential, they form the majority of scientific production of the whole country. The historically first meeting of the management of both universities and the SAS presidency took place at the Comenius University today.

One of the priorities of the scientific cluster, which is also part of the memorandum, is the internationalization of research. The institutions cooperate on several projects in this area. The SASPRO 2 project, which was initiated by the SAS and, in the second call, invited to the cooperation the CU and the SUT, enables the mobility of foreign researchers at our workplaces. The Slovak Academy of Sciences can accept up to 20 researchers and both universities congruently 10 researchers. Together, we will create conditions for cooperation with 40 researchers from abroad. “ I perceive its uniqueness on two levels. One of them is the support of the return of our scientists who have spent more time abroad; the second one is the internationalization of the scientific space in Bratislava,” said Pavol Šajgalík, President of the Slovak Academy of Sciences. Another project focused on the modernization of the research infrastructure of CU and SUT is the ACCORD project, which represents the historically largest investment in the modernization of infrastructure and the strengthening of scientific capacities.

It was perhaps the best to publicly demonstrate the irreplaceable role of scientists and researchers during the coronavirus pandemic. It was the doctors and experts of these institutions who stood in the front line. Daily, they worked with samples from potentially infected people, developing new tests and innovative protective equipment. “At the time of closed borders and a lack of medical devices in Europe, but also around the world, we have proven that we have the most important things at home. They are the top scientists and experts who have been able to develop world-class technologies and projects in a really short time and often in modest conditions,” emphasized the Rector of the Comenius University Marek Števček. The CU and SUT were also, at the same time, the first universities to interrupt full-time teaching on March 8, and send students home, thus preventing the mass spread of the virus in the beginning.

On the one hand, the survey showed that the confidence in research institutions such as the Slovak Academy of Sciences and universities has increased, on the other hand, the government is shifting finances from Eurofunds intended for science and research to other purposes. “As leaders in research, we currently feel the cessation of flows of Eurofunds intended for science and research in the period of 2016-2020 as a very serious problem. In particular, the current reallocation of 170 million euros for other purposes, in which the principle ofthe partnership was violated, leads to the fact that research universities will be the ones in the hands of which an imaginary “black Peter” will remain at the end of the programming period,” said the rector of the Slovak University of Technology Miroslav Fikar. Last week, representatives of scientific institutions met with the Minister of Education, Branislav Gröhling, to discuss the solution of the lack of money for science. The minister promised to give a statement by Monday, June 29.

The Comenius University and the Slovak University of Technology have decided on a joint strategy for reaching out to new students. They had a joint stand at the post-graduation education fair in Brno last year and presented Bratislava as a destination for quality study. Both universities plan to further expand this cooperation. Together with the Magistrate of the Capital City - Bratislava, they want to repeat it this year. Both universities repeatedly organize the day when the universities open their doors to all visitors.

The scientific cluster wants to continue to respond to social challenges in the future. Several of them concern the fight against climate change and environmental issues. The Minister of the Environment of the Slovak Republic invited the management of both universities and the SAS to cooperate in creating the independent analyses under the current situation. Among the projects in this area where institutions intersect is, for example, the water management project in Slovakia.