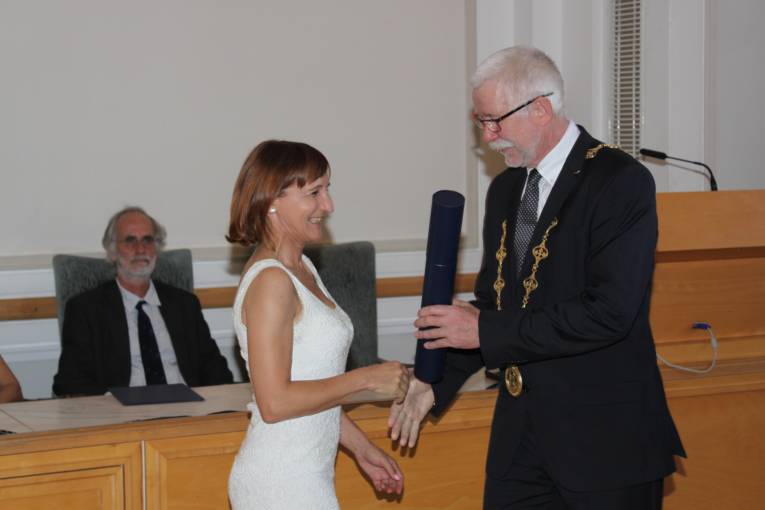 23. 6. 2016 | 3574 visits
On the afternoon of 23. 6. 2016, the annual award ceremony took place at the Slovak Academy of Sciences (SAS) Congress Centre in Smolenice to recognize SAS scientists and science popularizers. The Academy gives awards every year to mark the anniversary of its founding.

In the six categories individuals and teams received awards for science and research and six more prizes were awarded for the popularization of science. "We are able to identify the best and we should start a new stage of approaching the SAS Awards, so that they not only receive an award from us but also adequate support in every way," Prof. Pavol Šajgalík, the President of the SAS, said in his speech.

The award for scientific research work went to a team from the Laboratory of Environmental and Food Microbiology, under Dr. Domenica Pangalla of the SAS Institute of Molecular Biology. This team of scientists is examining ways of protecting both cultural heritage against bacterial attack and the quality of traditional Slovak foods by means of studying their microbial communities.

The next award was given to Dr Michal Novák from the SAS Neuroimmunological Institute, who is an internationally recognized for his work and one of the foremost scientists dealing with Alzheimerʼs disease. Prof. Novák, among other things, set up neuroimmunology as a new scientific field in the Slovak Republic and, during his scientific career, he has cooperated with several Nobel prize winners.

The Third Department for Society and Culture also received an SAS award. Dr Peter Bystrický from the SAS Historical Institute took it for his monograph Pes v mytológii, náboženstve a folklóre v staroveku a stredoveku (Dogs in mythology, religion and folklore in antiquity and the Middle Ages). It is an interdisciplinary publication providing an overview of the way dogs and humans have lived together for centuries from the viewpoint of various religions, countries and historical periods.

The young scientist award went to Dr Juraj Lieskovský, from the SAS Institute of Landscape Ecology, for the coordination of a prestigious international NASA programme. The Academy also recognized six science popularizers from both within the SAS and outside.

Prof. Michal Novák gave a speech of thanks on behalf of all those awarded: "In the name of all those of us recognized I want to say thank you. We appreciate it and it is an encouragement for us to continue our work, not because we have received the award but because our Academy has regard for us." At the same time, he cast his mind back to his beginnings at the SAS and thanked scientific figures who helped him at the beginning of his career and supported him in his travels abroad. In his opinion, they too assisted him to find a place among the global elite.