Celestial events to enrich the Christmas and holiday season

Even in winter, we can observe the celestial spectacle in the night sky. In the coming holiday period, there will be two meteor showers. A Christmas comet will also show up.

The Ursids meteor shower will be active from Friday, December 17, to December 26. Astronomer Antonín Bečvář, who is also the founder of the Skalnate Pleso Observatory, was the first to discover and observe the meteor shower on December 22, 1945. At that time, the frequency during the peak activity was up to 88 meteors per hour.

“The Ursíd meteor shower is related to the 8P/Tuttle periodic comet, the orbital period of which is 13.6 years. At its peak, we could see about 10 meteors per hour this year, but the conditions for observation are not going to be very favourable - the moon will be at its maximum on December 22, three days after the full moon,” explained Ján Svoreň from the Astronomical Institute SAS.

On the contrary, we will have excellent conditions for observing the annual Quadrantid meteor shower after Christmas, which is active from December 30, 2021, to January 7, 2022.  The night sky will not be disturbed by the Moon´s brightness because, at the time of the peak, it will be only 1 day after the new moon phase.

"The peak activity of the meteor shower will occur on January 3. It will only last a few hours. The vast majority of meteors will appear from dark until midnight, and we will be able to observe up to 45 meteors per hour,” emphasised the astronomer.

The frequencies of Quadrantids fluctuate significantly in individual years. “In 1864, 1909 and 1922, increased frequencies of up to 200 meteors per hour were observed. In 1953, the radar even recorded a short-term peak activity of up to 300 echoes per hour,” revealed Ján Svoreň. In the radar region, Quadrantides are stronger than the much better known Perseids and Geminids.

A Christmas comet will also show up in Slovakia during this year's Christmas holidays. During Christmas and after the New Year, there will be excellent conditions for observing the 67P/Churyumov–Gerasimenko short-period comet.  Due to its brightness around the 10th magnitude, a small telescope will suffice for observers. In December, the comet rises 2 hours after the sunset and will be visible all night in early January.

Our oldest Epiphany songs are from the Middle Ages
Read more >>

Christians in Egypt will celebrate Christmas on January 7
Read more >> 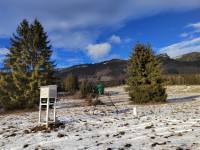